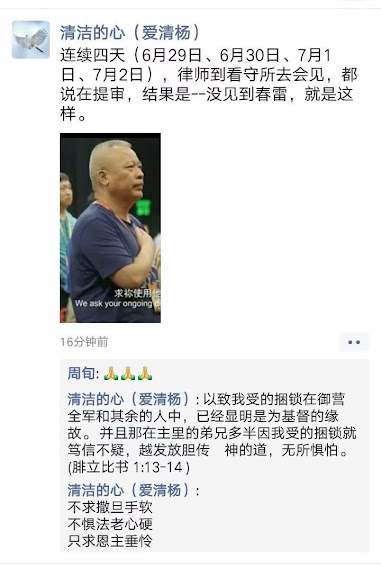 (Guiyang, Guizhou Province—July 05, 2021) On July 03, Yang Aiqing, wife of Elder Zhang Chunlei of Guiyang Ren Ai Reformed Church, revealed that detention center officials had repeatedly refused to permit the attorney representing her husband to visit him. Sister Yang posted on WeChat Moment that Elder Zhang’s attorney had traveled to the detention center and requested to visit him four times—on June 29, June 30, July 1, and July 2. Although the attorney’s requests aligned with laws, officials claimed that due to Elder Zhang “being in interrogation,” they could not arrange a meeting.

As a result of the Chinese Communist Party (CCP) authorities’ recent crackdown on Christianity and the ensuring fabricated charge of “fraud,” they have held Elder Zhang Chunlei in custody for 109 days. On March 16, when authorities officially arrested Elder Zhang, they changed his administrative detention charge to criminal detention. Additional other accusations against Elder Zhang include:

CCP authorities routinely fabricate charges like these to defame pastors or ministers. 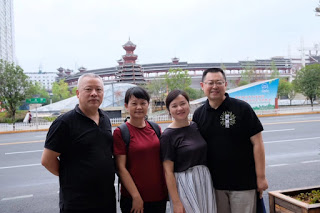 During the summer of 2018, Pastor Wang Yi (far right) and wife visited Elder Zhang and his wife.
(Photo: ChinaAid resource)

Regarding the CCP’s fabricated charge of “fraud” for the church taking offerings, Elder Zhang said:

The church collecting offerings is one of the teachings in the Bible, and churches across the world practice this.
I do not think what I did constitutes a crime.

Elder Zhang also said, “I do not have a grudge in my heart against the police. I love them as well as State security officers, and prosecutors who handle my case. I pray for them. I love and pray for my country—China.
As CCP authorities have severely targeted Guiyang Ren Ai Reformed Church, in Guiyang City, they raided the church on March 16, 2021, and arrested the pastor and numerous Christians attending there. They also searched homes of the pastor and coworkers and confiscated their possessions. This reflects part of the CCP’s massive suppression on house churches since the 129 crackdown on Early Rain Covenant Church.

The last time his attorney met with him on June 4, Elder Zhang Chunlei related his greetings to brothers and sisters in Christ, spiritual friends, and relatives. He said that he intercedes for them in prayer every day. He hopes that his relatives and friends submit him to God. He does not want them to worry about his situation, but encourages them to rather, remain joyful and hopeful.

Elder Zhang especially thanks God for his wife—Sister Yang, saying that he praises God for granting her to him as his wife, a gift of God’s great grace.

On July 3, Sister Yang posted the following on WeChat:

So that it has become known throughout the whole imperial guard
and to all the rest
that my imprisonment is for Christ.
And most of the brothers,
having become confident in the Lord by my imprisonment,
are much more bold to speak the word without fear
~ Philippians 1: 13-14

Sister Yang said, I prayed to God and did not ask that Satan be lenient. I am not afraid of Pharaoh’s hardened heart, but—I only asked the Lord to have mercy….

Elder Zhang Chunlei, detained since March 16: “Pray for me…, that I let God guide me”
Imprisoned Elder Zhang Chunlei: “Do not stop gathering with other Christians”
Church elder criminally detained without reason
Police detain Elder Zhang Chunlei 14 days; escalate “routine” home searches to confiscating church members’ property
###
But I have trusted in Your mercy;My heart shall rejoice in Your salvation.
~ Psalm 13:5 (NKJV)
China Aid exposes abuses in order to stand in solidarity with the persecuted and promote religious freedom, human rights, and rule of law. If you wish to partner with us in helping those persecuted by the Chinese government, please click the button below to make a charitable donation.