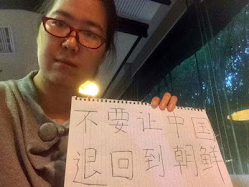 Shanghai [not part of a province], China—October 9, 2020) Lawyer Zhang Zhan, imprisoned in Shanghai Detention Center for more than 21 weeks, has been on a hunger strike more than a month. After meeting with Zhang on September 28, her attorney said that she appeared gaunt.

Zhang’s family and attorneys have tried to stop her from fighting, but Zhang said that she will continue her hunger strike and never compromise the truth or confess lies to the authorities. Zhang’s case will likely be processed in October.

Zhang questioned whether government measures dealing with the virus violated human rights and criticized Chinese government officials’ response to the Wuhan epidemic. Zhang also questioned whether officials covered up the truth about the fatality of the epidemic, suggesting that the mainstream press censored the truth about the severity of the epidemic. Zhang.

Zhang informed friends in May that undercover police in Wuhan spied on her. On May 14, friends and family members lost contact with her. The next day, state security officers transported her back to Shanghai. There, authorities charged Zhang with an identical charge they had imposed June 19, “picking quarrels and provoking trouble.” On September 18, officials transferred Zhang’s case to Pudong New District Court.

Zhang began her hunger strike in September. As she grew physically weak, authorities started force-feeding her. Her deteriorating health situation with the development of her case have garnered extensive attention on social media throughout the world.

Zhou Qing, force-fed when detained in the past, tweeted on Twitter, “When a prison staff member forced the hard-plastic tube through my nose for gavage [force-feeding], it punctured my throat. In turn, my blood and saliva mixed with the soup and cold liquid poured down the tube to stop my hunger strike.”

On September 20, the China Human Rights Lawyers Group urged authorities to stop harassing Zhang and her family. Their notice stated that Shanghai police and procurators illegally limited and voided numerous rights of the lawyers Zhang’s mother had appointed to represent her.

Zhang’s case has aroused domestic and overseas attention with supporters launching a campaign, with signatures, urging Chinese authorities to release her. Attorney Wen Yu from Guangzhou and Attorney Dai Peiqing, a shanghai local, Zhang’s legal representatives plan to “plead not guilty” for her.