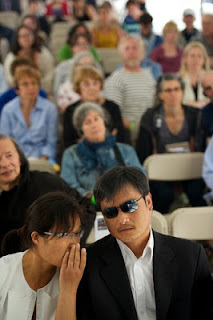 BEIJING — Dissidents inside China have long been accustomed to a lack of privacy in their daily routines. Phone conversations are monitored, e-mails are read and public security agents trail human rights activists when they venture outside their homes.

But according to officials at New York University, several electronic devices that were given to Chen Guangcheng, a Chinese legal advocate, soon after his arrival in the United States last year were loaded with spyware designed to track his family’s movements and their online activity.

Two of those devices, an iPhone and an iPad, were given to Mr. Chen by China Aid, a Texas-based Christian group that pushes for greater religious freedom in China. Bob Fu, the president of the group, said that he was out of the country when Mr. Chen arrived in New York so his wife, Heidi, handed over the equipment. The discovery of the tracking software came as a complete surprise, he said.

“This story is just crazy,” said Mr. Fu, an exiled Chinese dissident who championed Mr. Chen’s plight during the years of persecution Mr. Chen endured as an opponent of forced abortion.

The allegations, first reported by Reuters, threatened to further complicate an already messy narrative surrounding Mr. Chen’s tenure at N.Y.U., which includes accusations that school officials, bowing to pressure from the Chinese government, sought to curtail his public advocacy and then forced him to leave the Greenwich Village campus sooner than he expected.

School officials and associates of Mr. Chen, who is blind, have vehemently rejected such assertions and insisted that his fellowship at N.Y.U. was always meant to last one year.

Mr. Chen has declined to provide evidence backing up his assertions, issued in a brief statement last Sunday, that Beijing pressured N.Y.U. to terminate what he acknowledged was a generous arrangement that included tutors, security and housing for him, his wife, and their two children.

With Mr. Chen silent in recent days, Mr. Fu has become one of his more vocal advocates, eagerly telling reporters what Mr. Fu said were instances in which N.Y.U. tried to limit Mr. Chen’s access to conservative political figures and advocates who opposed abortion. Representative Christopher H. Smith, Republican of New Jersey, who frequently confers with Mr. Fu on human rights issues in China, has threatened to convene a Congressional hearing on Mr. Chen’s time at N.Y.U.

According to people with knowledge of the episode, Mr. Fu’s wife presented the Apple devices to an assistant of Jerome Cohen, the N.Y.U. law professor who was instrumental in arranging Mr. Chen’s exit from the American Embassy in Beijing, where he had sought refuge after escaping house arrest.

The gifts, along with at least two other phones that were handed to the assistant, arrived on the chaotic day Mr. Chen and his family landed in New York. After an examination by N.Y.U. technicians, all the devices were found to be compromised with spyware, said an associate, who asked to remain anonymous because he was not authorized to speak to the news media.

The spyware included global positioning software that allowed a third party to track the whereabouts of the device, and presumably its owner, and another program that copied its contents to a remote server. After removing the spyware, technicians returned the Apple devices to the Chens, who were told about what had happened. The two other phones, their provenance a mystery, were not given to Mr. Chen.

“He was upset, but he was more concerned about the relatives he left behind who were being mistreated by the authorities,” the associate said.

Mr. Fu was not informed about the spyware on the items, and by all accounts, his relationship with the family deepened in the months that followed.

John H. Beckman, an N.Y.U. spokesman, confirmed the broad outlines of the episode but said he had no further information. Professor Cohen told Reuters he thought the compromised devices were an attempt to keep tabs on Mr. Chen remotely. “These people supposedly were out to help him, and they give him a kind of Trojan horse that would have enabled them to monitor his communications secretly,” he said.

Professor Cohen was traveling in Asia on Friday and could not be reached for comment.

In an interview, Mr. Fu said he learned on Thursday from Reuters that the items his wife had bought at an AT&T store in Texas were compromised. He said a technician he employs had activated the devices and added Skype but nothing else.

He suggested that the spyware could have been installed after his wife dropped off the items but before they were given to the Chens, a gap of at least a day.

“More than anyone else, we want to get to the bottom of this,” he said, adding that he had asked the F.B.I. to look into the matter. “We will fully cooperate with any investigation and hope N.Y.U. will do the same.”

A version of this article appeared in print on June 22, 2013, on page A8 of the New York edition with the headline: Devices Given to Chinese Legal Advocate Had Tracking Spyware, N.Y.U. Says.