Ding Mao, Reunited with Family, Thanks Those Who Worked for His Release 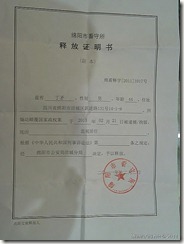 (Chengdu, Sichuan—Dec. 6, 2011) Longtime political activist Ding Mao, reunited with his wife and young son after nearly 10 months of detention for forwarding Twitter messages about the Arab Jasmine Revolution, expressed thanks to all those who had contributed to his Dec. 2 release.


ChinaAid believes that, given the history of how China’s ruling Communist authorities have handled similar cases, and especially in light of Ding’s longtime political activism and the eight years he served in prison for his dissident activities, his sudden release is clearly the result of the intervention of the international community, in particular the U.S. State Department and congressional leaders.  This shows that persistent diplomacy can achieve results, and ChinaAid urges the international community to continue its efforts to win the release of all prisoners of conscience in China.

This is a summary of Ding’s case:

Because early in the year he had forwarded some Twitter messages that referred to “Jasmine,” Ding was taken away by four police officers on Feb. 19 at 10 p.m. from the Funan New District of Chengdu, capital of Sichuan province.  He was formally arrested on March 28, but to date, he has not been tried despite the passage of more than eight months.  In the meantime, his wife, Feng Xia, had repeatedly tried to go see him, but was refused every time.  Lawyers were also making great efforts through legal channels.

On Oct. 16, Ding’s wife, Feng Xia, arrived in the United States, determined to do whatever she could to help win her husband’s freedom.  She hoped to tell the international community the truth of Ding’s case and to appeal to the international community to take greater notice of his case.  She also hoped to get some needed legal help.  While in the United States, Feng met with many influential members of Congress, government officials and media, doing her utmost to appeal on behalf of her innocent husband.

On Sunday Nov. 6, Feng ended her three-week visit to the United States and flew back home to Chengdu, where she was met at the airport by a U.S. consular official, who invited her to sit down for tea.  The next day, the U.S. Consulate officially invited Feng to the consulate for a one-hour meeting with three officers who asked her detailed questions about Ding’s case and the family’s suffering.

Ding Mao, male, age 44, of Apartment 14-1-9; No. 131 Yuejin Road, Fucheng District, Mianyang City, Sichuan province, arrested/detained on Feb. 21 in an inciting subversion of state power case, is now released in accordance with the decision of the Mianyang City Public Security Bureau Fucheng Sub-bureau, based on “Criminal Procedure Law of the People’s Republic of China” Section [blank] for the reason of house arrest.
Dated: Dec. 2, 1011