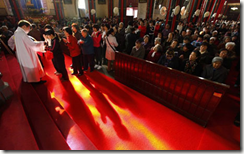 The Telegraph By Peter Foster  World  Last updated: May 5th, 2011
Christians receive communion at the state-controlled Xishiku Cathedral in Beijing (Photo: Reuters)
China’s security establishment is in a ruthless mood at the moment, taking on the “tall poppies” of the law, the media, the blogosphere and the arts without apparent fear of a backlash from a public that instinctively knows the value of compliance, and the price of defiance.
However, there is another, much larger grouping, that is also heading for a collision with the “Goon State” (that’s the Economist’s) and with potentially much more serious consequences – the millions of Evangelical Christians who choose to worship outside China’s official churches.
For the last four weeks one of Beijing largest unofficial churches, the Shouwang, or WatchTower, church has been in a stand-off with police over its desire to worship free from state control, with hundreds of its members detained and its leaders put under house arrest.

Now this week Christian groups are warning that the government is preparing to take “new measures” against the Shouwang and some other ‘underground’ churches like the small New Tree Church of Beijing.
It is not yet clear what these measures might be, but if the State really is seeking a confrontation with the house church movement then it is bearding a far bigger and potentially dangerous tiger than the liberal fringes that it has attacked so far.
There are several reasons why China’s security czars might want to proceed with caution:
1. Sheer weight of numbers. The lawyers, bloggers and artists are few. China’s unofficial Christians number into their millions, with estimates ranging from 20m-60m. They are a mass movement.
2. The persecuted have a righteous God on their side. Already the rhetorical temperature is rising, with one Shouwang pastor describing the government as an agent of “Satan” seeking to destroy God’s Church. As Christian martyrs have shown over the centuries, including in China, the religiously motivated are prepared to go to great lengths to defend their faith.
3. The Americans really won’t like it. Despite some international condemnation, China’s leaders haven’t suffered meaningful repercussions for their recent “backsliding” on human rights. The sufferings of artists and lawyers don’t really gain much political traction, but not so the Christians who are a powerful political lobbying force in the US. A widespread persecution holds the very real risk of poisoning a relationship with Washington that, for all its ups and downs, is still Beijing’s number one foreign policy priority.
4. The apparent justice of the Christian’s cause. The House Church movement in China is explicitly not revolutionary. It disassociates itself from all talk of Jasmine protests and rejects (perhaps somewhat disingenuously) all suggestion that it is an agent of “Foreign Forces” – ie US missionaries who work to subvert the State. The groups profess great loyalty to the State in earthly affairs – which is to say, the churches are happy to pay their taxes, comply with health and safety inspections etc etc – but in matters spiritual they will submit to only one master: The Lord Jesus. (See point 2.)
So on my last post Josh asked for news of the Shouwang: the answer is that we must see what happens between now and Christmas (the date that the Church has pledged to continue its outdoor worship) and whether the Churches can sustain their cause against the State, and if so, how hard the State is prepared to push back. (Christianity Today carries a fair overview here.)
If that happens – and given the State’s record in 1989, in Tibet, in Xinjiang and in recent months, it’s very possible – then potentially turbulent times lie ahead. Forcing Christians to chose between their loyalty to their Church and their State is choice that many don’t want to make, but they will, if pushed.
It is far from clear whether the underground movement is cohesive enough to respond collectively if the Chinese government took egregious steps against the Shouwang.
But the potential for trouble was brought home to me recently in a conversation with someone intimately connected with the Christian movement in China who was definitely worried about where the current confrontations might lead. The House Church is avowedly and deliberately non-political, he said, but its congregations are loyal first to God and then their pastors. “In the end, the faithful will do what their Pastors tell them to do.”
That, of course, is exactly what the Chinese State fears, but it may yet regret forcing the issue and discovering how far some Christians are prepared to go in defence of their faith.
http://blogs.telegraph.co.uk/news/peterfoster/100086519/picking-a-fight-with-chinas-christians-is-a-dangerous-move/