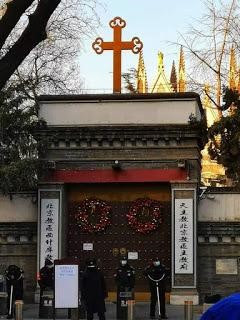 During 2020, the Chinese Communist Party severely restricts/shuts down various churches and Christmas celebrations

On December 24, the approved application form for the Taihu Catholic Church revealed a total of 12 red seals. Authorities limited the number of people permitted to attend the events to 250. 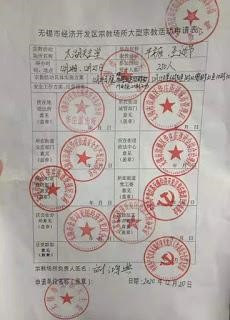 ChinaAid related the news that aligned with their severely- regulated approval process, the CCP had banned the Beijing Catholic Church of the Savior, also known as the Xishiku Church, from opening on Christmas Eve. Authorities had stationed armed security guards wearing black uniforms to barricade the church’s entrance and prevent parishioners from entering.

In addition to the vast display of the CCP’s increased control in front of Xishiku Church, China’s complicated, challenging process to obtain approval for hosting Christmas events, according to some netizens appears to send the following warning. “If you want to celebrate Christmas-you have to get past us first.”

Cai Xia, a professor who recently resigned from her position as principal of the Central Party School, asserts: “These [Christmas regulations] are anti-humanity and anti-civilization. This deprives people of their right and freedom to religious belief. It is extremely crude and barbaric. Moreover, Xi Jinping is not even trying to conceal the naked truth that he wants to manipulate the decline of citizens’ spiritual culture, to become uncivilized….”

During the 2020 Christmas season, CCP authorities operated the party’s schedule as usual and permitted restaurants on the streets to open for business. Officials closed Beijing churches, however, in the name of the COVID-19 outbreak.

CCP authorities not only restricted Catholic Christmas activities during 2020, they threatened and harassed citizens celebrating Christmas in West and Southwest China as well. ChinaAid reported the following related stories: