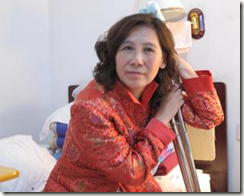 (Amsterdam, the Netherlands—Dec. 22, 2011) The Dutch government on Thursday announced that its 2011 Human Rights Defenders Tulip award was going to Chinese Christian human rights lawyer Ni Yulan, who had been nominated by China Aid Association and Christian Solidarity Worldwide.

The announcement of this year’s recipient was delayed by almost two weeks. The award is usually presented on International Human Rights Day on Dec. 10. Ni’s selection as the 2011 award winner was made by an independent judging committee in late November, but because she was at the time facing trial, her daughter and lawyer requested that the announcement of her selection be delayed to protect her.

The prize “is intended as a tribute to a man or woman who has shown exceptional courage defending and promoting the rights of their fellow citizens,” according to the award’s website at http://humanrightstulip.org/simplepage/home/ . The 2011 award ceremony is planned for early next year. See the announcement from Dutch Ministry of Foreign Affairs at : http://www.minbuza.nl/en/news/2011/12/ni-yulan-awarded-human-rights-defenders-tulip.html

Ni, a lawyer since 1986, has already served two prison terms. While in police custody, she was permanently disabled as a result of torture and now requires crutches or a wheelchair to get around.

In early April, she was again taken into police custody, and she was formally arrested in May and charged with “creating a disturbance.”

ChinaAid founder and president Bob Fu said of Ni’s selection as this year’s Tulip award-winner, “This is a great day for human rights defenders in China and hopefully it will lead to the unconditional release of Ni Yulan.”

He added, “We thank the Dutch Government and our partner organization Christian Solidarity Worldwide for making this award happen. It is a sign that the international community will not forget China’s brave human rights defenders. Hopefully, one day, China will not imprison those peacefully working for human rights. ”

Ni’s activism dates back to 2001, when the Beijing neighborhood where Ni lived was slated for mandatory demolition advance of the 2008 Olympic Games. Ni started to help her neighbors fight to save their homes or claim compensation.

In April 2002, when she videotaped the forced demolition of a neighbor’s house, police immediately arrested her, and in November she was sentenced to a one-year prison term for “obstructing official business.” She was also disbarred.

After the 2008 Beijing Olympics, Ni was arrested again when her own courtyard house was forcibly demolished and was given a two-year sentence for the same crime of “obstructing official business.” When she was released from prison a second time, in mid-2010, Ni and her husband were homeless and lived in a park. When they rented a small room in a guesthouse, they were under such constant harassment by government officials that they were forced back out onto the streets.

Jon Huntsman, the former U.S. ambassador to China and now a Republican presidential candidate, visited Ni and her husband when he was the ambassador in Beijing.