(The Hague—Feb. 1, 2012) The Dutch government on Tuesday gave its 2011 Human Rights Defenders Tulip Award to Chinese human rights lawyer Ni Yulan in absentia because the woman lawyer is in a Chinese prison awaiting trial and her daughter was barred by the Chinese government from traveling to Holland to accept the award on her mother’s behalf.

More than 150 people attended the award ceremony, including members of the Dutch parliament, ambassadors, representatives of Dutch NGOs and the media. ChinaAid, which along with Christian Solidarity Worldwide had nominated Ni for the award, was represented by Edwin Baelde, chairman of one of ChinaAid’s partner agencies, the Dutch non-governmental human rights and religious freedom group SDOK. ChinaAid founder and president Bob Fu was unable to travel to Holland due to a scheduling conflict. 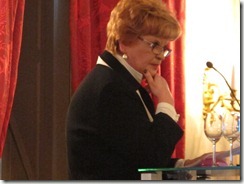 Cisca Dresselhuys, chairwoman of the jury that selected Ni, said at the ceremony that Ni was by far the most qualified of the 77 candidates from 50 countries who were nominated for the 2011 award.

(Cisca Dresselhuys, chairwoman of the jury)

She expressed regret that, unlike the previous three award ceremonies where the award winner was on hand to personally receive the award, this time the honoree was in prison and unable to attend. Her presence was represented by an empty chair.

“I have so much appreciation for Ni Yulan,” Dresselhuys said. “It hurts me personally that she is not here and that her chair is empty.”

She described Ni’s many years of activism to protect citizen’s rights and said the jury felt that “the time for diplomatic silence is passed…. Economic factors are no reason to be silent about such courageous persons.” 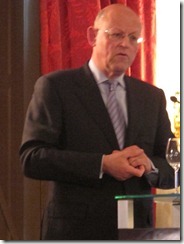 Foreign Affairs Minister Mr. Uri Rosenthal in his remarks emphasized that human rights are a pre-condition for a well-functioning society.

“To defend human rights means that you must have courage. Yulan has shown this courage,” he said.

Rosenthal added that the Dutch government considers freedom to be a fundamental part of its foreign affairs policy, and by having good relations with China, it makes it possible to put certain topics on the agenda for bilateral discussion.

Expressing regret for the Chinese government’s refusal to allow Ni’s daughter to travel to Holland, Rosenthal said, “I will do my utmost to see that this award reaches Ni or her family.”

As the main organization that nominated Ni for this award, ChinaAid warmly congratulates sister Ni Yulan’s selection as the 2011 Human Rights Defenders Tulip Award winner. At the same time, we urge the Beijing regime to immediately release Ni Yulan and her husband, Dong Jiqin.

See these earlier reports on Ni’s award and criminal case: