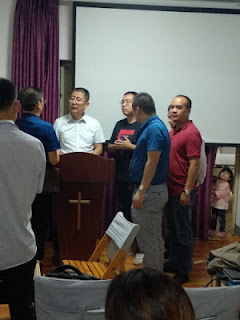 The church’s pastor, Wang Yi, said that some Christians who host small groups in their homes have been harassed by the police or community officials. Two of the church’s branches were raided by the local ethnic religious affairs bureau on two consecutive Sundays, and one of the church’s online channels has been deleted and banned, with all files erased.

In a newsletter, the church says that landlords and regional authorities have put pressure on about 30 Christians recently. Some landlords canceled their leases with the church’s branches and their attendees due to pressure from the ethnic and religious affairs bureau. One Christian was fired after officials harassed his company.

This is not the first time Early Rain Covenant Church has been targeted. One of its campuses, Linxishu Church, was raided by the Jinniu District Ethnic and Religious Affairs Bureau on Sept. 16. One of the church’s ministers, Cao Qingen, was taken away by police because he refused to stop the service. Deacon He Xuedong continued to lead the worship after he was taken. Afterwards, He and the church’s landlord were seized as well. All three were released that afternoon.

When the church organized a prayer meeting to remember the victims of the earthquake that decimated the region 10 years ago, Song Enguang, one of the church’s attendees, was slapped in the face by an official. As a result, Wang, a lawyer, and 10 other people went to the police station. They were detained on charges of “disturbing social order” and weren’t released until the next morning.

ChinaAid exposes abuses, such as those suffered by Early Rain Covenant Church, in order to stand in solidarity with the persecuted and promote religious freedom, human rights, and rule of law.