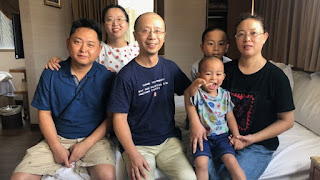 Liao and his family hope to reside in Taiwan as they seek asylum in the United States. Questions as to whether or not they will be able to stay in the country long enough to do so remain unanswered, since they only have a 15-day Taiwanese tourist visa.

Hopes are the government will provide more time for the family to stay and go through the proper procedures, according to Radio Free Asia.

In the meantime, Liao and his daughter, Ren Ruiting, have been describing living under constant surveillance in China and some of the tactics authorities have used against church members.

On Dec. 9, 2018, ChinaAid broke the news that more than 100 Early Rain Covenant Church members had been taken into custody during an official crackdown on the church. By the end of the week, that number had risen to more than 150.

ChinaAid has extensively reported on persecution against Early Rain Covenant Church since the December arrests. In mid-June, Jiang Rong, the wife of Pastor Wang Yi, received a bail release after months behind bars.

Yesterday, news broke that authorities held a Christian man affiliated with Early Rain Covenant Church under secret incarceration for months inside the basement of a local public security bureau office.

Liao says police tried to convince him to denounce the church via written statement.

He says he would accept a decision by elders to break up the church, but refused to comply with demands by authorities since it’s not up to them to deem the church “evil or illegal.”

Radio Free Asia reports Liao says he and his family members have been illegally summoned and harassed countless times, and that many other members of the church experience similar persecution. According to Ren, officials summoned believers to try and frame Pastor Wang and others.

Ren also told the Associated Press she was forced to report her location to police anytime she went out. Otherwise, they said her safety could not be guaranteed.

That’s when Liao decided that “it was no longer safe for us here, and that my children were most in danger.”

Still, Ren maintains hope she will return to her native China. “‘Whether it’s five years, or even 10 years, we’ll eventually make our way back to where God wants us to serve,’” AP quotes her as saying.