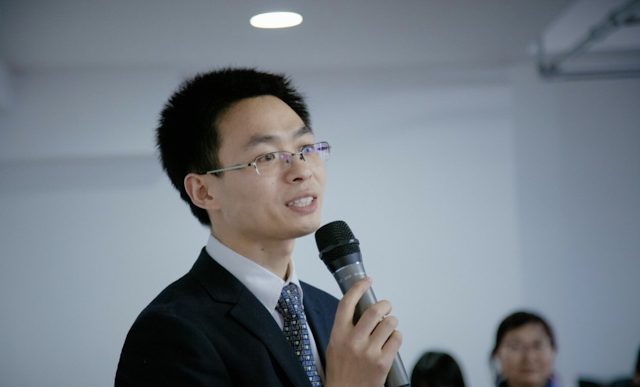 (Chengdu, Sichuan-Dec. 29, 2019) ChinaAid note: This is part two of one of five articles written by ChinaAid correspondent Yu Ren about the persecution of Early Rain Covenant Church. The other parts, including part 1, will be posted shortly.


In court, Qin Defu loudly proclaims that faith is no crime

At the beginning of December 2018, Qin Defu, the elder of Early Rain Covenant Church, said, “It’s time to write a New Year family intercession letter.” A few days later, however, when police arrested Defu for “illegal [business] operations,” he lost his freedom. His wife did not complete the New Year intercession letter until Feb. 4, 2019.

The year 2018 turned out to be a mixture of sadness and joy for Defu. During this year, he lost one family member when his father died in a car accident, but he gained an additional member with the birth of Zhuoling, his daughter. By the end of 2018, Defu, 37, born in rural Deyang, Sichuan Province, became a prisoner because of his faith.

In 1989, Defu’s father believed in the Lord. He opened his family to the Gospel and later became a preacher. Many years after this, he realized the problems of the Three-self Church, so he left the Three-Self Church and joined the house church network. Twice, authorities held Defu’s father for, respectively, half a month and one month for religious reasons. He died in a car accident on his way home after preaching a sermon. His greatest wish in his life had been that more Christians in the Three-Self Church would hear Pastor Wang Yi’s sermon to help them correct their wrong theology. But his wish did not come true until his memorial ceremony. On that day, many pastors and missionaries of the church heard Pastor Yi’s sermon.

After graduating from junior high school, Defu, who had been immersed in the Christian atmosphere since a young age, dropped out of school. He followed his relatives’ example, starting his own business and gradually building a well-off life. After work, he regularly served at local gatherings—both big and small. Although other shops sold porn discs, when Qin Defu, an intelligent, honest, loyal and trustworthy man, opened a VCD rental shop, he won the respect of customers, as he refused to sell them. In 2011, Defu married Xiao Hongliu, who later earned a master’s degree. The couple settled in Chengdu and in 2014, became members of Early Rain Covenant Church. Because of their shared faith/belief, God blessed their marriage.

In 2017, the Lord called Defu to serve the church full-time. After the church elected him as a deacon, he left his “fishing net,” closed his Taobao shop [Editor’s note: Taobao is an organization that, much like Amazon, sells a variety of products], and wholeheartedly followed the Lord. As his family life became more difficult, Defu’s faith became extra fervent. When he and Hongliu travelled to Jakarta to attend the 500th Anniversary Conference of Religious Reform, they both felt ignited, excited, and determined to serve the Lord for life. In 2018, Defu, ordained as a church elder, primarily fulfilled responsibilities for church management.

Pastor Wang Yi recounted an episode regarding Defu in a sermon. On the Sunday the church ordained Li Yingqiang and Qin Defu as elders, Pastor Yi, preparing his sermon notes on the computer, typed “ZL.” He intended to type the Chinese characters for “elder.” However, the word “in prison” popped up. As a result, his typing became: “Li Yingqiang ‘in prison’ and Qin Defu ‘in prison.’”

At the end of April 2018, Qin Defu and his church’s brothers and sisters travelled to the Wenchuan earthquake disaster area for a brief preaching tour. While they were en route, police placed them on their official “wanted list” and sent Defu’s photo to the police stations along the way, warning that Qin Defu, the backbone of Early Rain Covenant Church, would soon be in their areas to engage in illegal religious activities. When Qin Defu returned home, he joked with his wife, “Whether or not I am the backbone depends on the Lord? I only know I am super skinny.” After two days and three nights of brief preaching, Defu and his brothers and sisters experienced people reporting them to the police en masse, police knocking on their doors and state security tracking them. Several times, authorities took them to the police station. Despite trials, the group completed the preaching tour singing hymns and praising the Lord.

On the day before May 12 [Editor’s note: May 12 is the anniversary of the Sichuan earthquake, which Early Rain Covenant church commemorates], authorities secretly took Wang Yi and Li Yingqiang away. Qin Defu and several brothers of the church searched until 3:00 a.m. without any results. Afterwards, they travelled back to the church to prepare for the next day’s prayer meeting. In the early hours of the morning, police officers surrounded the church to stop members from going upstairs. At approximately 10:00 a.m., as Christians upstairs and downstairs simultaneously sang and prayed, a loud noise interrupted them. Amid the prayer of the Christians, police broke into the church and took Qin Defu and another elder away. When released the next day, Defu gave his testimony in the church; admitting that when he arrived at the police station, he had prepared for not being able to come home. “If I go there, my Heavenly Father is already there,” he said. “If I stay here, my Christian brothers and sisters are here. Both are extremely good.”

In 2018, Qin Defu’s devoted mother, who loves Jesus, not only experienced the loss of her husband and her son’s arrest, she suffered from a personal injury. When Xiao Hongliu asked her, “What do you think of all this?” she calmly replied, “Sister Xiao, I’m not worried about your brother (referring to Qin Defu) [Editor’s note: Chinese Christians refer to each other as “brother” or “sister”]. He didn’t do anything bad. Those in power are not to spread fear to those doing good, but to those doing evil. So, I’m not afraid at all. I know that God sent your brother to learn his lessons. He will come back when he has finished his studies. It may also be that he is sent to work and will come back when the work is finished.”

On the evening of Dec. 9, dozens of police officers escorted Qin Defu away. Although Hongliu and his lawyer went to the detention center many times to apply for a visit, authorities rejected their applications. Although family and others have heard little news of Defu’s life in prison, it is said that he has been preaching the Gospel to his fellow inmates. At the beginning of August, the family received a notice saying that Defu had hired two lawyers for himself in prison. Thus, officials refused the intervention by the lawyer his family had hired. At the same time, authorities refused to relate any information about Defu’s two new lawyers.

On Nov. 29, 2019, Qingyang District Court of Chengdu secretly tried Qin Defu’s case. At this time, he had been detained for almost one year. A few days before the trial, police again interviewed members of Early Rain Covenant Church on a large scale, warning them not to go to the court. On the day of the court session, plainclothes officers surrounded Qingyang District Court, blocked roads in a radius of a kilometer, and posted a notice saying “No visitors due to system upgrade” at the gate of the court. Hongliu received two hearing gallery passes. More than 10 people attended the court hearing

In court, wearing a grey green coat, Defu calmly responded to the judge’s questions. Based on the number of church hymnals and pamphlets for evangelizing which the prosecution presented, the judge pointed out that the defendant Qin Defu’s “crime is particularly serious” and “the number involved is extremely large.” In court, the prosecution did not mention Qin Defu’s church or his identity as a Christian, apparently separating the case from the church. Defu refused to plead guilty to the charges. The judge ultimately sentenced him to four years’ imprisonment. In his final statement, Defu said, “I am a Christian who served in the church and served others according to the needs of the church. As an ordinary citizen, I did not do anything against the law or regulations. Faith is no crime.”

After being sentenced, Defu asked the police to take a message to his wife, asking Hongliu not to submit to the pressure of the police and plead guilty. “My conscience did not allow him to do so,” he said.