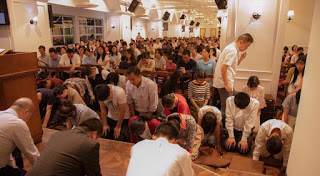 Three times, from May 5 – 7, unknown agents also deflated the tires on Minister Wu’s car; ultimately damaging them to the point they were not repairable and had to be replaced.

Yesterday, at 3 pm, as Minister Wu returned home from a funeral the church had held, Damian Police Station officers summoned him to their station on a charge of suspected “disturbing public order.” They released him about 9 pm.

https://chinaaid.org/2020/11/update-after-military-police-raid.html
ChinaAid: Although, as examples of religious freedom abuse reveal, Chinese Communist Party (CCP) authorities may, and routinely. stop worship services, as well as siege Christians who preach. They cannot, however, stop intercessory prayers for those being persecuted.
###
Therefore I exhort first of all
that supplications, prayers, intercessions,
and giving of thanks
be made for all men….
~ 1 Timothy 2:1 (NKJV)
China Aid exposes abuses in order to stand in solidarity with the persecuted and promote religious freedom, human rights, and rule of law. If you wish to partner with us in helping those persecuted by the Chinese government, please click the button below to make a charitable donation.