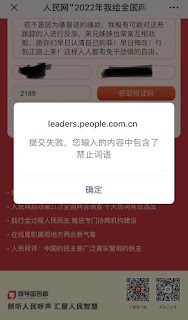 (Chengdu, Sichuan Province—February 22, 2022) On February 18, a Christian of Early Rain Covenant Church responded to a public call for input on the webpage of People’s Daily Online, titled “Listen to the People’s Suggestions: My Message to the National People’s Congress in 2022” leaving a message to Zhao Kezhi, the minister of Ministry of Public Security. She earnestly wrote the message to Minister Zhao, but People’s Daily immediately rejected her message. Their programmed response said, “Your submission did not go through, and the message you input includes forbidden words.” Later she posted her message on WeChat Discovery, but it was deleted shortly afterward.

This Christian attending Early Rain Covenant Church questioned Minister Zhao by asking the question “Do Christians Have Rights?” She recapped what happened to herself and other brothers and sisters of the church since the crackdown on Early Rain in 2018, which included illegal surveillance, police harassment, and violence. She strongly pushed back against the means the government uses to oppress its citizens’ freedom.

The member first introduced herself to Minister Zhao Kezhi, stating that she is one of the Christians attending Early Rain Covenant Church in Chengdu and a mom of three children. She has been targeted by the police since they knocked on her door on December 9, 2018. They verbally notified her that Early Rain Covenant Church was shut down. In the past three years, she and her family have been followed closely, put under surveillance, photographed, and stopped from attending Christian gatherings. On important holidays, including June 4th, National Day, Christmas, police always come by her house and harass her family. She filed numerous complaints to Qingyang District Police Station, but the Public Security Bureau rejected her claims.

She questioned Minister Zhao Kezhi, asking him “What does freedom of religion stipulated in the Constitution mean? Is it a joke? I didn’t break any laws, can I be followed and photographed for a long time? Can taxpayers’ money be squandered on maintaining the stability of taxpayers?”

“Do not hope that I will give up my Christian faith, God chose me. Christians are the conscience of society. We obey laws, respect marriage, value families, and we are willing to multiply and raise children according to God’s will. No matter how you look down on us, slap our faces, evict us, stuff our locks, vandalize our doors and walls, tear our hair, or burst into our homes… Many of us would like to pray for your souls and be kind to you all.”

People’s Daily Online adds a tag “Message to Leaders” under the call for advice, all netizens’ messages to leaders are welcome. However, the suggestion of the Christian of Early Rain Covenant Church could not be submitted, and the post on independent social media was taken down as well.