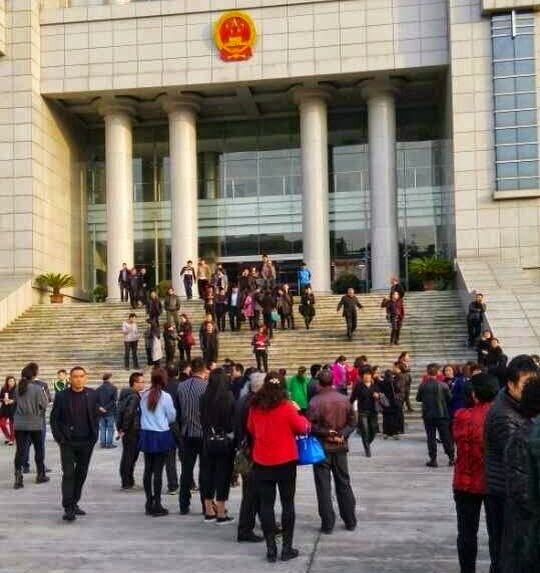 By Rachel Ritchie
(Wenzhou, Zhejiang–March 26, 2015) Eight Christians associated with Sanjiang Church, which was demolished in China’s coastal Zhejiang in April 2014, were sentenced after pleading guilty to charges of “illegal occupation of farmland” and “gathering a crowd to disturb public order” on Wednesday.

All eight, including Guo Yunhua, a Sanjiang Church elder, and Zhao Rendi, who was in charge of the church’s parishes in Jiangbei District, Ningbo, were detained after they stood alongside thousands of other local Christians against officials who intended to demolish the church, which they succeeded in doing on April 28, 2014.

“All eight people pled guilty,” a worshipper who attended the trial said. “Zhao Rendi was sentenced to three years in prison with a four-year reprieve. The others received sentences ranging from several months to a year, and all got reprieves of several months.”

Many speculated that the defendants were coerced into pleading guilty.

A church member told China Aid that more than 100 people requested visitors’ passes to the trial, but not all were allowed to attend. “There are 168 seats in the No. 1 Courtroom on the third floor of the Yongjia County People’s Court. Almost all the seats were taken,” the man said.

The defendants’ indictment stated that they built Sanjiang Church on more than 38,000 square feet of farmland and that they planned and organized illegal assemblies for church members to sing hymns and pray in the church. The indictment also alleges the defendants “obstructed the government’s efforts to correct the illegal structure of Sanjiang Church,” which resulted in the government spending more than 1.2 million Yuan (U.S. $193,000) on stability maintenance.

The trial was set to begin on Tuesday but was postponed due to the trial of Pastor Huang Yizi of Pingyang County, Wenzhou, which took place on Tuesday.

Both cases are connected to the province-wide persecution campaign, “Three Rectifications and One Demolition,” that began in Zhejiang in 2014 and victimized more than 425 Protestant and Catholic churches.