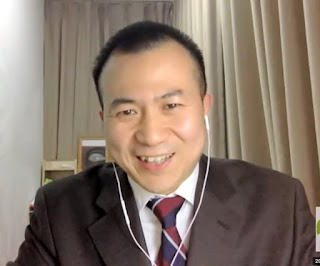 (Chengdu, China—October 24, 2022) On October 18, national security officers notified Elder Li Yingqiang of Early Rain Covenant Church that he is not allowed to organize nor attend the ”5 PM in China” prayer meeting. They also required Li to promise that he would not attend a prayer meeting during the 20th National Congress of the Chinese Communist Party, but he refused. National security officers said that they would find Li Yingqiang every day before 5 PM so that he couldn’t attend his meeting.

National security officers stayed at Elder Li Yingqiang’s home until 5:30, during which Li Yingqiang and his family sang hymns together. Each of them prayed and prayed imprisoned pastoral staff including Pastor Wang Yi, Elder Hao Ming, Elder Zhang Chunlei, and others. Officers recorded them. They still made it to the 5PM prayer meeting although they could not attend it online. National security officers said that the control would last till the end of 20th National Congress of the Chinese Communist Party (October 28, the end of the first plenary session).

Before they left, the authorities asked Elder Li if he would attend the prayer meeting tomorrow, promising they would not show up at his house he would not attend. Li responded that he could not agree, so they should come again tomorrow and bring summon papers with them.

“5 PM in China” is a virtual kingdom-oriented prayer meeting initiated by Early Rain Covenant Church, and people intercede for each of the imprisoned pastors, elders and Christians via Zoom every day from 5-5:30PM (Beijing Time). The names on the prayer list include those who are sentenced, such as Pastor Wang Yi, Elder Qin Defu, Pastor John Cao, Elder Hu Shigen, Pastor Bao Guohua and his wife—Xing Wenxiang, Pastor Zhang Shaojie, Chen Yu, Pastor Alimjan Yimit, Lai Jinqiang, Pastor Yang Jianxin, Ju Dianhong, 6 Christians including Liang Qin, Zhang Zhan, Chang Yu Chun, the Li Shenhui couple, Brother Chen Yunfei, Pastor Hao Zhiwei, Minister Geng Zejun; and those who are detained but not sentenced and whose update is not available; and those Christians who have been released (or those are bailed out or not prosecuted after being arrested).

The meeting idea originated as a promise from Elder Li Yingqiang and his wife Zhang Xinyue. Many pastors, elders, deacons, and Christians of Early Rain Covenant Church were prepared to be jailed before the 129-incident occurred. Li and Zhang planned that they would pray simultaneously every day at 5 PM if he were arrested. After being released, Elder Li said that every day at 5 PM was the most wonderful experience at the detention center because he knew his family was praying with him. He learned that many other Christians prayed with him as well.

So far, over 100 volunteers have joined the prayer call. Elder Li Yingqiang thinks that “5PM in China” has drawn some departments’ attention, and he may not be able to pray with others online soon, but he and his family will pray together every day at 5 PM. Nothing could stop him from praying even though he would be taken away to a police station or detention center. He asked everyone to pray for the kingdom-oriented ministry, and may the Lord continue to protect and guide each person, and may the Lord watch over other pastors so that they can continue to serve the prayer meeting.