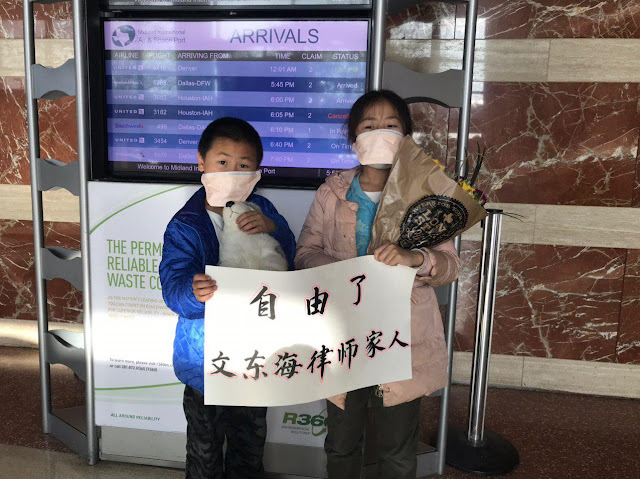 
(Midland, Texas—March 18, 2020) Note: The following is a letter from Zhou Youfang, the wife of human rights lawyer Wen Donghai. Zhou and her children recently fled China to Texas.

We are Lawyer Wen Donghai and his wife, Zhou Youfang. I, Zhou Youfang, and our two kids safely arrived in Texas, USA on March 16, 2020, at 9:00 p.m. with you all’s collective help and then settled in a place at our destination.

Lawyer Wen Donghai has been a fugitive in mainland China since we three from our family fled to Japan on Dec. 30, 2019. Tons of people helped us without condition during that period. If I gave a list of their names, it would be ongoing. The list not only affirms the group of Chinese human rights lawyers to some degree but also demonstrates the power of democracy existing among Chinese folks and the international community. It is humanity and hope. I cannot release the names in light of their own safety, but I would like to say thank you to you all, and I am so grateful that you all helped us out when we were in a crisis. Many friends have cared for us and supported us regardless of where we are, in Japan or the USA, so that our escape culminated into a lighthouse of hope.

Although our entire family, along with Lawyer Wen Donghai, were fugitives in mainland China, and we were uncertain when we would reunite, we had been blessed by God and were all safe and healthy. Originally, we intended to avoid political persecution caused by the fact that Lawyer Wen Donghai attended the “Xiamen Conference,” but it turned out that we were not hit by the Wuhan coronavirus, the plague. Our entire family feels fortunate compared with the Chinese who have been stuck in the plague and people across the world who have been infected by the virus. Some pro-CCP people who have been misled by the CCP and returned to China to survive the plague and have complained that they are not treated decently and humanely, saying that they are just a number to Chinese authorities. Nevertheless, they are not aware that many Chinese folks who were wronged and died never get the chance to be a number. For instance, some events happened several decades ago, such as the famine, the Cultural Revolution, the 1989 Tiananmen Square Massacre, and the number of deaths is still unavailable. Man-made and natural disasters that occurred in the past few years, including the explosion in Tianjin, the shipwreck in the Yangtze River, etc., and who knows the number of innocent people whose deaths never draws attention. Again, after the break out of the coronavirus, how many people on the list of governmentally diagnosed and aided people, [redacted for clarity] including those who resisted death and protested without success, were not included in the data the government released regarding those who have died?

It is not easy for a family to move out and leave their home country, and you can imagine how difficult it would be when a family rushed to move out. We may have a lot of regrets and encounter a lot of challenges in the future, but our hearts are full in the process thanks to the hospitality and help offered by many friends and strangers. Our gratitude is beyond our words, and we cherish all of these.

Finally, we are grateful for each of you who have helped us and thankful that God’s hidden hand has led us to the USA, a country of freedom.

(Note: Lawyer Wen Donghai’s wife will not take interviews for the moment because Lawyer Wen Donghai is still a fugitive in mainland China, and his wife needs rest after a long journey. Please refer to this manuscript for details of their escape. Thank you!)