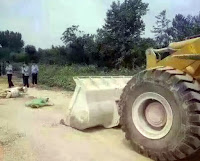 (Heze, Shandong—Aug. 24, 2016) A government employee in China’s coastal Shandong province used a front loader to maul a farmer protesting the forced acquisition of his land on Sunday morning, resulting in his death.

According to social media posts, the government forcibly seized the farmer’s property and dispatched a team to build a road across it. In an attempt to stop the construction, the landowner stood before a front loader, which plowed over him and killed him.

Officially, the state claims the death was caused by a faulty operation of machine and says it is investigating the situation, but internet users allege that it was intentional. Most social media posts related to the incident have been deleted, leaving little information on the event.

“Is the government any different than bandits?” one post read.

This reflects a similar occurrence on March 7, 2014, when a government-hired demolition team beat and trampled on protesters. Peng Shengbin, a local resident facing forced relocation, told China Aid that the demolition team kidnapped his wife on March 22, 2014: “They kicked her and beat her. My wife kowtowed to them, saying ‘Don’t kill me! We don’t have any money!’ They grabbed her hair and shoved her against the car. Afterwards, they abducted my wife and took her to a hotel.”

No government institution answered his repeated complaints and appeals.

China Aid exposes abuses, such as those suffered by protesters in Shandong, in order to promote human rights in China.