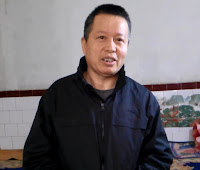 (Asku Prefecture, Xinjiang—Sept. 23, 2015) In an exclusive interview, Gao Zhisheng, a prominent human rights lawyer who was released from jail on Aug. 7, 2014, provided insight into the horrific details of his imprisonment in China’s far western Xinjiang, including three instances of torture and life in a confinement cell.

In his interview from a family member’s home in China’s inland Shaanxi province, Gao exposed the Chinese government’s involvement in torturing prisoners. He states that he was tortured three times while in jail. After the first incidence, he penned a complaint to the government, expecting his torturers to be charged for their actions; however, during the third session, the same men tortured him again. He quotes them saying, “You should have known that the article you wrote would not work. The Communist Party relies on us. The higher government officials are nothing without us and what we do for them.” When Gao fell asleep during one of his torturers’ breaks from beating him, they kicked his head and said, “You heartless creature, you are able to sleep? We haven’t been able to sleep well for two to three days after torturing you, but you can sleep. This is the difference between a human and a dog.”

According to Gao, the nature of his imprisonment violated Chinese law. He lived in a seven square meter confinement cell intended for major criminals and was not permitted any of the diversions that the other prisoners were allowed, such as watching television. Although a person may only legally be kept in a confinement cell for 15 days, Gao was held there for three years.

He also recalls a message that repeatedly played over the loud speakers: “Communism will inevitably win while capitalism will surely die. This is the absolute destination of human history.”

In his case, Gao asserts that the word “release” should be in quotation marks; he has been under 24/7 supervision even after obtaining his freedom and has not even been allowed to shower. He states, “It’s impossible to have real freedom. The Communist Party is a prison. I will never be able to coexist with them under the same sun. All my experiences have made me understand, and they have also repeatedly said to me that I will never have freedom as long as they exist.”

Originally, police kidnapped Gao after he sent letters to the authorities calling for them to cease persecuting Falun Gong practitioners, an action the officials called “inciting state subversion.” He was subsequently sentenced to three years in prison with a one-year deprivation of rights and a five-year probation period; however, this time was cut short when he was brought back into custody in September 2007. After his release 50 days later, he wrote an article describing how he was tortured, titled, “Dark Night, Dark Hood and Kidnapping by Dark Mafia.” The American Board of Trial Advocates awarded him the Courageous Advocacy Award for this work.

He was kidnapped again on Feb. 4, 2009, only to reappear in March and April 2010. Police took him into custody shortly after that, because he began spreading news of his torture. For 21 months, his family had no contact with him, and he was sentenced to three years in Shaya Prison in Xinjiang in 2011.

Gao acknowledged that releasing the video detailing his torture and other experiences in China could lead to more trouble, including another disappearance into official custody. However, Gao said he is prepared for any persecution that comes as a result of exposing the Chinese government’s actions.

Currently, Gao is in the process of finding a publisher for two books he has written, a process in which China Aid has assisted.

The Associated Press was the first to break news about Gao’s torture.

Gao’s full interview can be viewed below.

Please consider giving a gift to assist in the translation and publication of Gao’s book or to assist China Aid in its mission to expose abuses such as those Gao suffered in prison.