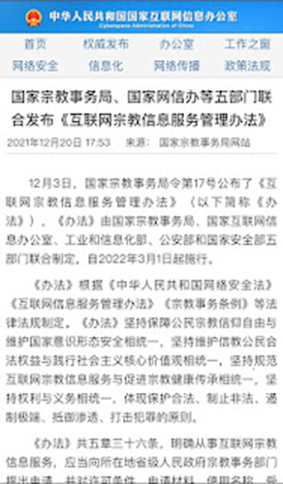 The
measures, which will come into effect on March 1, 2022, were jointly formulated
by five departments – the State
Administration for Religious Affairs, the Cyberspace Administration of
China, the Ministry of Industry and Information Technology, the Ministry of
Public Security, and the Ministry of National Security. The measures were
written in compliance with the “Cybersecurity Law of the People’s Republic of
China,” “Administrative Measures for Internet Information Services,” and the
revised “Regulations on Religious Affairs.” The legislation prohibits
individuals or organizations from uploading and teaching on the Internet, nor does
it allow the publishing or reposting of sermons online.

The
purposes for the administrative measures are to “adhere to the unity of
safeguarding citizens’ freedom of religious beliefs and safeguarding national
ideological security,” and to “adhere to the protection of religious citizens’
legitimate rights and interests with the practice of core socialist values.”
The regulation also “insists on standardizing online religious information
services and advancing the healthy inheritance of religions; insists on the
unity of rights and duties, and to embody the protection of legitimate rights
and interests, hinder illegal acts, curb religious extremism, resist religious
infiltration, and fight crime.”

The
measures have a total of five chapters and thirty-six articles, which state
that those who wish to participate in Internet religious information services
should apply to the provincial departments of religious affairs and stipulate
requirements on licenses, application materials, username, and the time limit
for acceptance. Online teaching of scriptures and preaching should be organized
and carried out by religious groups, religious schools, temples, and churches
that have obtained the “Internet Religious Information Service License.”

No
organization or individual may conduct fundraising in the name of religion on
the Internet. Religious activities such as worshiping Buddha, burning incense,
ordinations, chanting religious texts, services, masses, and baptisms are not
allowed to be broadcast live or recorded by means of text, pictures, audio, and
video.

Article 19 states that organizations and
individuals must not raise funds in the name of religion on the internet.

Since
the outbreak of COVID in Wuhan, China, authorities forced Christian faith
groups, in particular, to halt church gatherings, forcing them to meet online. The
Chinese government issued a law that explicitly prohibits Christians (including
other faith groups) from publishing online religious information.

An
elder of a house church in Shandong said: “The authorities first used the
pandemic to force many churches from offline to online. Now they continue to
keep the momentum going and persecute churches by deeming the online gatherings
as illegal.”

The
Chinese authorities’ ban on online gatherings and the prohibition of Christians
from posting religious information on the Internet is tantamount to a total ban
on religious activities.

Even
if religious organizations or individuals can apply for Internet Religious
Information Services, the administrative measures require approval from the
provincial religious affairs departments. Observers familiar with China’s harsh
political environment predict that the success rate of religious groups
applying for online religious services will be severely low, and authorities
will strictly filter all religious information.

The
state of religious freedom in China has deteriorated after the implementation
of the revised “Regulations on Religious Affairs” on February 1, 2018
(prohibiting “unauthorized” religious doctrines and requiring religious groups
to report any online activities). The Chinese government continues to persecute
all believers, to “sinicize” religious beliefs (aligning with the Chinese
Communist Party’s beliefs), and to eliminate independent religious beliefs.

Article
36 of China’s Constitution guarantees citizens the “right to freedom of
religious belief” and stipulates that the government protects “normal religious
activities.” However, this freedom is restricted due to various religious
regulations and administrative measures adopted by the authorities. The power
to interpret the clauses concerning religious freedom in the constitution is
entirely in the hands of the administrative departments. The Chinese government
widely uses these regulations and administrative measures as a basis for
persecuting religious groups. The constitution also prohibits religious bodies
and religious affairs that are subject to any foreign domination, which is used
to suppress the Uyghurs and other Muslims, Tibetan Buddhists, Christians, and
other religious groups.