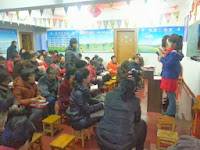 Bo Ai conducted a legal training session at a house church in Lincang, Yunnan, on May 19 on an invitation from the church’s pastor, Mr. Yang. The session was actually a continuation of an earlier session from which Bo was abruptly called away.

Yang told Bo that the house church faced repeated persecution before they contacted Bo. Local police have arrested church members, searched their homes, illegally fined them, and confiscated property. Yang said police once went to six Christians’ homes and took away a cow from each home. In August 2013, police raided a gathering and confiscated money and Bibles.

When Bo originally began the rule of law training, he led church members to the local police station to negotiate. Police were forced to return all the confiscated money and items because they didn’t possess legal documents giving them the right to seize the Christians’ property during the raids.

More than 50 Christians from dozens of churches in a 60-mile radius attended the three-day training. Attendees told Bo that they felt empowered to defend their religious freedom and fight the police’s illegal actions.

China Aid supports legal trainings like this in order to empower more Christians to fight for their legal right to religious freedom, which in turn allows them to grow and share their faith.