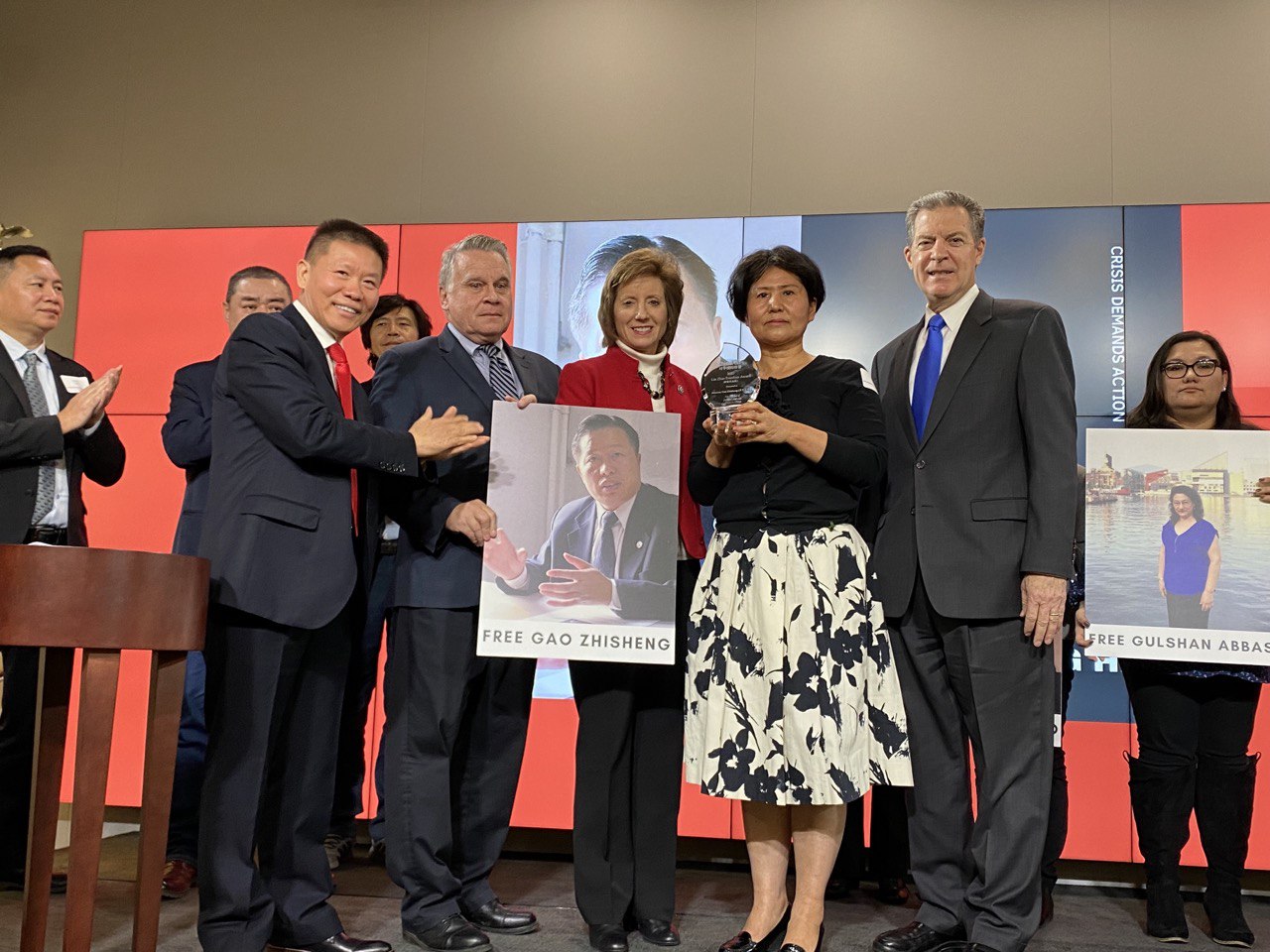 (ChinaAid, Midland, TX—December 10, 2021) ChinaAid hosted the “Crisis Demands Action” luncheon on December 7 to honor Gao Zhisheng and Zhang Zhan with the Lin Zhao Freedom Award for their efforts to promote rule of law and human rights in China. Ambassador Brownback introduced a multi-faith campaign for advertisers to boycott the Beijing Olympics. Families of prisoners of conscience shared their experiences of persecution and escaping from China.

Bob Fu, president and founder of ChinaAid, shared after the event: “It was encouraging to hear from these families. The last time this many [families] have been together at one time was two years ago.”

The Lin Zhao Freedom Award continues the legacy of Lin Zhao, a Christian who stood against Chairman Mao at the height of the Cultural Revolution. Professor Lian Xi from Duke University wrote Lin Zhao’s biography Blood Letters, and he provided context for her importance in Chinese history:

In 1960, when she was 28, she was arrested as a counterrevolutionary for helping to launch an underground journal. That journal told the truth about widespread famine during Mao’s Great Leap Forward, which claimed at least 36 million lives. In prison, Lin Zhao kept up an open opposition to Mao and Chinese Communism, calling it slavery and totalitarian tyranny.

Lin wrote these letters in her own blood on cloths and rags, taking a visceral stand against communist China. Zhang Zhan and Gao Zhisheng embody her spirit and commitment in their fight for human rights and rule of law.

Neither Zhang Zhan nor Gao Zhisheng was present to accept their awards. Gao was forcibly disappeared four years ago, and Zhang Zhan’s health continues to deteriorate in Shanghai Women’s Prison. Geng He, Gao Zhisheng’s wife, accepted his award on his behalf: “It has been 1677 days since Gao Zhisheng was forcefully disappeared, his life and death are unknown, nor do we have any ideas on his whereabouts.” According to Geng He, Gao’s disappearance only shows the weakness of the Chinese Communist Party.

However, the point is not whether we understand Zhang Zhan or not; the point is to ask ourselves this question: if the rest of us has had one-tenth of Zhang Zhan’s strength and determination to stand up to the totalitarian regime in China, what difference would we have made? What a different place would we be today?

Millions of prisoners of conscience suffer for their convictions in China. One of these prisoners, Zhang Haitao, currently serves a 19-year sentence for exposing Uyghur concentration camps in Xinjiang. His wife, Li Aijie, shared his story:

The Chinese authorities are using the heavy sentence of an ordinary person who speaks the truth to intimidate the people of Xinjiang and the Chinese people as a whole. Just as citizen journalist Zhang Zhan was heavily sentenced for going to Wuhan to report the truth about the Xin Guan epidemic. In this way, they have easily deprived a person of his freedom for 19 years, even his life.

Li Aijie has not seen her husband in three years, and fears that he has died in prison. Their son, nicknamed Little Mandela, never met his father. Unfortunately, this is a grim reality for many parents and children in China.

To hold China accountable, Sam Brownback calls upon advertisers to halt their support of the Olympics until there is a firm date for the release of these prisoners and a complete shut down of the Uyghur concentration camps.