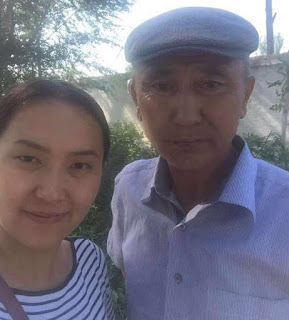 Family desperate as three members sent to prison for immigration

(Bole, Xinjiang—April 15, 2018) A family is reeling after three of its members were imprisoned in China’s northwestern Xinjiang, two of them sentenced to 10 years for their involvement in immigration.

Garkenbeke Kasenbayi, a religious Kazakh from Bole, Xinjiang, was secretly sentenced to 10 years in prison last July after returning to China from Kazakhstan the month before. The Chinese Communist Party claimed he had “spreading extreme religious ideologies and encouraging Kazakhs in Xinjiang to immigrate to Kazakhstan” and “inciting ethnic hatred and division.” His wife’s retirement pension was also stopped. His indictment indicates he earned these charges for traveling to Kazakhstan several times and helping his wife and sons immigrate, but his family members did not receive this document. Kasenbayi, who is 57, was sent to an “anti-extremist training center.”

When Kasenbayi’s daughter, kindergarten teacher Shanshangul Garken, attempted to hire a lawyer for him, she vanished, and the family later learned she had been sent to a “political training center.”

“Anti-extremist training centers” and “political training centers” are both official terminology for a network of prisons within Xinjiang that hold ethnic minorities accused of arbitrary crimes. The inmates are often tortured, as revealed by an incident in which 20 had to be hospitalized after suffering mental breakdowns.

In mid-March 2017, Kasenbayi’s distant cousin, 36 year-old Kenjebek Analbek, was taken from his home. No one heard from him until his family learned that he had been sentenced to 10 years in prison on Aug. 19 for giving instructions on how to immigrate to Kazakhstan over the Chinese social media platform WeChat, which authorities termed “leaking state secrets.”


Unfortunately, this family’s situation is not uncommon, as more and more Kazakhs are being sent to these centers under trumped up charges. For instance, a man only identified as an imam named Zaupan, was criminally detained in June for engaging in religious activities, and he has not been heard from since. A local Kazakh said, “The government accused 46 year-old Zaupan of studying with another imam 20 years ago. His name is unique. Zaupan means ‘uprising,’ so the government believed that he planned to subvert the state.”

In addition, at least 18 young Kazakhs from a town in Zhaosu, Xinjiang, were sentenced to 4-10 years in prison for using WeChat to criticize the government.

ChinaAid exposes abuses, such as those suffered by Kazakhs in Xinjiang, in order to stand in solidarity with the persecuted and promote religious freedom, human rights, and rule of law.