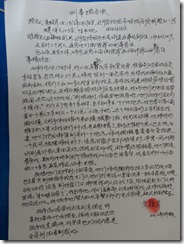 (Beijing — May 30, 2012) Zhu Guiqin, a Christian woman living at 26#, 13th Block, Anju Community, Changchun Street, Fushun City, Liaoning Province, was unfortunately kidnapped and raped by security personnel hired by the local government when she travelled to Beijing to petition on April 11, 2012. She reported to the police immediately, but the police in the two cities of Liaoning Fushun and Beijing shifted responsibility to each other. The case has not been formally filed up to the present and the criminal suspect Xiaohai is still walking around as a free man.

(Scanned picture left:  Zhu Guiqin’s Report of Accusations)
Below is the recount of Zhu Guiqin.

It was about 5pm of April 11, when I walked out of Beijing Gangwasi Church. I was going to take a bus right across the street from the church entrance when three men ran up to me by the bus stop, grabbed me and pushed me into a minivan parked by the street. The vehicle took off right away, and they immediately took away my Identification Card, my two cell phones, one USB drive, bank cards and over 200 yuan in cash that I had on me. These items have not been returned to me to this day. I spotted police on the street from inside the car, so I started yelling for help. The four or five people who kidnapped me grabbed me, put a mask over my head, and bound up my mouth, arms and legs with wide plastic tapes in five or six layers. They also pushed down 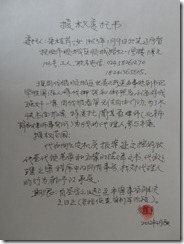 a row of back seats and placed me underneath them, so that I couldn’t move, not to mention utter any sound. Then these kidnappers started making a phone call. I could tell the person on the other side of the phone was Bi Shengguo, the Associate Secretary of Changchun Street Office, Fushun City. (His phone number: 13941311009) They also said to me when they pushed me into their vehicle, “Don’t hate us. Hate your local government. We don’t understand either why your local government hates you so much. They asked us to kill you in five days. We’ll let you go right away if you could give us 3000 yuan.” From their conversations in the vehicle, I could tell one of them is a retired veteran from the army in some city of Liaoning.

After about half an hour’s ride, the vehicle stopped at some place. I couldn’t see their faces clearly. One of the kidnappers got off the car. He brought back a man named Xiaohai and said to him, “Rape her”. Xiaohai got into the car and started touching my breasts. He also reached his hands into my underwear to molest me and then he took off my pants and raped me. Another kidnapper was present when this happened. They transported me to another place afterwards and carried me into a room with my body bound up and my head covered by a mask. All the windows of the room were sealed tightly and it was pitch dark inside. I could feel someone walking around outside the room but I couldn’t utter any sound. In the daytime, they brought me out of the room. When I refused to eat in mealtime, they would grab my jaw and pour milk into my mouth by force. At night, they transported me back to the dark room and took turns guarding me. During these nights, Xiaohai, the man who raped me, also came over to guard me. I could tell that he was about 1.6 meter in height and had a long face. Later when I was transported back to my home, he was among those escorting me.

I was detained like this until the late night of the 13th. They bound me up, carried me into a vehicle, and drove all the way until they reached Shenyang at daybreak. When they finally untied my body, my arms and legs were swollen. There were three men in the vehicle. They called someone up when we reached Fushun city and the vehicle went directly to the entrance of Fushun Municipal Government. Then I saw a black car coming out of the gate of the government building, and started following behind the car I was in. The two cars went straight to the neighborhood I live in and stopped. It was about 7 or 8am in the morning of the 14th. When my kidnappers let me get off the vehicle, I saw Bi Shengguo, the Associate Secretary of the Street Office standing at the entrance. He came up to me and said, “You are home, Ms. Zhu”. Obviously, my kidnap was conducted jointly by the local government and the thugs who kidnapped me.

After I got home, I was blocked in my home by seven or eight guards sent by Bi Shengguo and I wasn’t allowed to step out of my door. I managed to call the local police to report the case, but the police said I had to report the crime in Beijing since it happened there. When I called the Beijing police, I was told to report to the local government since the act was committed by them. They switched responsibility back and forth. This afternoon, I finally was able to get out of my home and, being tailed by three women sent by the Street Office, I got to Changchun Street Police Station, ShunchengDictrict, Fushun Public Security Bureau, and reported the case. The policeman who received me (ID: 403562) told me to go to Beijing to report the case since it happened in Beijing and was beyond their jurisdiction. I asked him to make a written record of my report, but he said he would not do it.

Since I was closely watched by the local government and could not make a trip to Beijing to report the case, I had no choice but to authorize in written from lawyer Lin Qilei from Beijing Ruikai Law Firm to report the case on my behalf and handle other legal issues related to the case.

China Aid recently contacted lawyer Lin Qilei for updates on the case. The following is his account about the reporting of the case.

I arrived at Xicheng Branch Police Station at 13:10pm on April 23, 2012, Monday. The person in the janitor’s room was neither a security guard nor someone in police uniform, who refused to let me in citing the reason that this as a government organ does not handle case-reporting. At 13:46 pm, I called 110 and waited to be contacted by the police. I was called by Tiantan Police Station and Changqiao Police Station respectively (phone numbers: 65115598 and 66177606), who determined that the crime was not committed within their jurisdiction. At 14:02pm, a police of West Chang’anjie  Police Station called from the number 66037399 asking me to go to their office for a talk. So I went to the police station located at No 18, Xirongxian Alley. A police with the ID number 025257 received me and claimed that he couldn’t accept the case because the location where rape was committed could not be identified. I argued reasonably that “you should investigate because the victim doesn’t know where she was raped.” Another police with the ID number 026355 and the surname Luo showed up. He might be the person in charge there. His response sounded more reasonable. At last, he said, “When investigating rape crimes, we need to ask the victim lots of specific questions. We need the victim to be here and we’ll do some appraisals. If it’s a criminal case, we’ll need to report to the Crime Investigation Team. They will come over to ask questions and decide if the case will be accepted. The victim must be here for this process.” I relayed the information to the victim immediately, but she was detained illegally for a long time and could not come to Beijing to report the case. It was not until a few days ago did the victim make it to Beijing. But after reporting the case for three days, the police station only asked questions and made a written record of interrogation. They did not produce a receipt of case report. When I called the police today inquiring about the case, they said that they were conducting investigation.

Lawyer Lin Qilei told us that the victim had kept her underwear, which was important evidence for the crime. But she does not trust the police or public authorities, dreading that they might collaborate with Liaoning Fushun government and replace the underwear. So she decided to keep it to herself now. She will submit it to the police in the right time, at least when the case is formally placed on file. In light of the multiple occurrences of female petitioners being molested and raped recently, and what was committed against Zhu Guiqin is a serious criminal offense, we will try our best to bring justice for the victim. We also hope that the Beijing police will handle the case by law as soon as possible, punish crimes and protect citizens’ physical safety and other rights.

China Aid was shocked by the case. In the national capital of China, in a time when the Chinese government called on the building of a harmonious society and proclaimed to the international community that China’s human rights condition had improved significantly, heinous crimes against disadvantaged female petitioners have happened frequently. The passive inactivity of the Beijing police has condoned and encouraged the unlawful practices of local governments. We earnestly call on the Chinese government and Beijing police to stop the violations of citizens’ bodies and take tangible measures to punish crimes and protect the legal rights of victims.

Zhu Guiqin is a Christian. Early in 2004, she was unlawfully sentenced to three years’ education in labor camp because she went to Beijing to petition for her rights and interests. She was sent to MasanjiaLabor Camp which is notorious for torturing and persecuting Falungong practitioners. She endured indescribable torture and persecutions during her time there. After she was released, she constantly went to Beijing to petition to relevant government agencies, which offended the local government. So the local government hired illegal security guards to take revenge on her. Ms. Zhu is almost 50 years old and yet the man who raped her is only in his early twenties. This is an appalling crime! It also proves the absence of rule of law in China, moral deterioration, and the fact that public authorities have become mafias. We call on Chinese Christians to pay close attention to this case and pray for Ms. Zhu.

China Aid is closely watching the development of the case and will do its best to provide help to Zhu Guiqin.