FROM THE ALL-PARTY PARLIAMENTARY PRO-LIFE GROUP

The blind, Chinese human rights activist Chen Guangcheng will tomorrow (Monday 20th May 6.30pm) be presented with the first ever “Westminster Award” for his contribution to human rights, human life and human dignity. 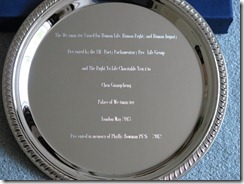 Intimidated, beaten, arrested and imprisoned, Chen Guangcheng, although going blind as a baby, is a self-taught lawyer and human rights activist who has challenged the brutal practices of forced abortion and compulsory sterilisation of women pursued by the authorities in China which have led to tens of millions of babies being killed. He escaped house arrest, fled to the American Embassy in Bejing and was eventually permitted to fly to the USA with his wife and children. Chen refuses to be silenced and is coming to London and Brussels to share his experiences with senior politicians and to call for tough international action to put pressure on the Chinese Government to end these barbaric practices.

The award, an engraved silver platter to be known a 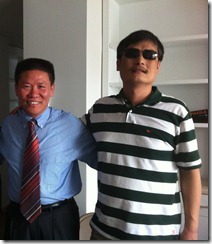 s the Westminster Award for Human Life, Human Rights and Human Dignity, will be presented to Chen in the Grand Committee Room of the House of Commons, London, by the Vice Chair of the All-Party Parliamentary Pro-life Group, Fiona Bruce MP (Cons. Congleton,) and Chris Whitehouse, a Trustee of the Right to Life Charitable Trust, in the presence of an invited audience of MPs, Peers, human rights activists and the media.

Speaking today, Fiona Bruce MP says: “Chen Guangcheng’s fight for respect for life from its earliest moments  -  at great personal cost to himself  -  stands out as a beacon of bravery across the world.  It will be an honour for all present to acknowledge this when he receives his very much deserved award in Westminster tomorrow.”

Chen Guangcheng comments through a translator saying: “I am truly honoured and delighted to receive this first ever Westminster Award on this my first ever visit to the British Parliament. I have always been encouraged in my work by the knowledge that I had friends here in the Palace of Westminster and throughout the United Kingdom. I thank them all for their support.”

Lord Alton of Liverpool who invited Chen to London says: “Chen must rank as one of the great men of this generation. He loves his country and its people but not its coercive one child policy. One day he will be celebrated in China as a national hero who bravely stood against the system and paid a heavy price for doing so".

Right to Life Trustee, Chris Whitehouse adds: “Chen’s family in China continue to be brutalised, intimidated and threatened. This must stop. In saluting Chen’s truly remarkable courage we call on the Chinese authorities to cease their cowardly bullying of his innocent family and friends”.

Chen’s campaigning work is actively supported by China Aid in recognition of which Right to Life will also be presenting Chen with a cheque along with the award. The visit was sponsored by the LIFE Charity, the Christian campaign group CARE, and the Right to Life Charitable Trust.

For security reasons access to Westminster Hall for the presentation on Monday 20th May at 6.30pm is limited. Those hoping to attend should ensure that they have permission and that their name is included on the list of attendees by contacting the office of Fiona Bruce MP:

This is the inauguration of an annual Westminster Award for Human Life, Human Rights and Human Dignity presented by the All-Party Parliamentary Pro-Life Group and funded by the Right to Life Charitable Trust in memory of its Founder, Phyllis Bowman, who died a year ago.

Fiona Bruce is Vice Chair of the All-Party Parliamentary Pro-Life Group and is the Conservative Member of Parliament for Congleton, Cheshire. On 16th April this year, Mrs Bruce was given the leave of the House of Commons to introduce a Bill under the Ten Minute Rule Motion to highlight illegal sex selection abortions in England and Wales as well as overseas: www.publications.parliament.uk/pa/cm201213/cmhansrd/cm130416/debtext/130416-0001.htm#13041638000002

The Trust works to help some of the most vulnerable members of our society. It provides practical support for pregnant women in difficult circumstances and works for the sick and the elderly: people who find themselves in need and have nowhere else to turn. www.righttolifetrust.org.uk