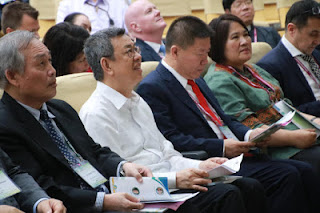 
(Washington D.C. —June 24, 2019) Five rights groups applaud the work of participants in the Taiwan International Religious Freedom Forum (TIRFF) for issuing a Declaration on the Persecution of the Uyghurs.

The collective encourages “urgent action by parliamentarians, governments, private companies, scholars and universities, and the UN in response to policies aimed at the erasure of freely expressed religious belief, practice and identity across China.”

Co-hosted by The Presbyterian Church in Taiwan, ChinaAid, the Heritage Foundation, and the Taiwan Association for China Human Rights, those involved in the May 30th – June 1st TIRFF summit came from 21 countries in the Asia-Pacific region.

Forum discussions revolved around a variety of religious freedom topics, culminating in penning a declaration concerning the “existential crisis” faced by the Uyghur people stemming from a “current massive campaign of destruction and extermination of their ethno-religious identity conducted by the government of China.”

Participants requested the European Parliament to establish an intergroup addressing the “severe suppression of freedom of religion suffered by the Uyghur, Tibetan, Chinese, and other peoples under the rule of the Chinese Communist Party.”

The Declaration also calls on worldwide governments to levy restrictions on technological transfers to the Uyghur homeland, asks pension funds and charities to divest from entities connected to Uyghur repression, and requests universities to cease cooperation with China’s Ministry of Education, among other requests.

According to the UHRP, WUC, UEN, Campaign for Uyghurs, and UNPO, the U.S. Congress should also “act swiftly” to pass the pending Uyghur Human Rights Policy Act of 2019.

H.R.649 condemns “gross human rights violations of ethnic Turkic Muslims in Xinjiang” and calls for stoppage of “arbitrary detention, torture, and harassment of these communities inside and outside China.”