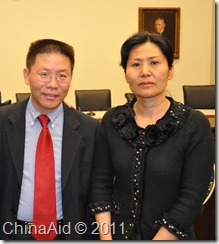 (Washington, D.C. – Jan. 1, 2012) For the first time since his most recent forced disappearance 20 months ago, the whereabouts of human rights lawyer Gao Zhisheng were confirmed on Sunday.

ChinaAid learned that Gao Zhisheng’s older brother, Gao Zhiyi, received written notification on Sunday of Gao’s incarceration in Shaya Prison in the Xinjiang Uyghur Autonomous Region in far western China. The notification was signed and dated on Dec. 19 by the prison.

(Photo: Bob Fu and Geng He the wife of Chinese dissident Gao Zhisheng, speak in the Hearing in Washington, Jan. 19, 2011. )

Gao disappeared into police custody in April 2010, the most recent in a series of forced disappearances since his 2006 conviction on a subversion charge. On Dec. 16, just days before his five-year probation period was to have ended, the Chinese government announced that it was sending him to prison for three years for violating his probation. It was the first word that he was still alive, but no information of his whereabouts or condition was released.

Shaya (Xayar) Prison is located in Aksu Prefecture, about 1,130 kilometers (700 miles) southwest of the Xinjiang capital of Urumqi.

“Gao’s internal exile reminds the world of how former Soviet dissident Andrei Sakharov was cruelly treated in Siberia in the 1980s,” said ChinaAid founder and president Bob Fu, a friend of Gao. “The Chinese government can use this remote jail to prevent concerned people from visiting Attorney Gao, but just like Sakharov, Gao’s courageous voice can never be silenced by the four walls of his prison cell.”

Gao Zhiyi is planning to visit Gao Zhisheng as soon as he gets a physical address of the prison.