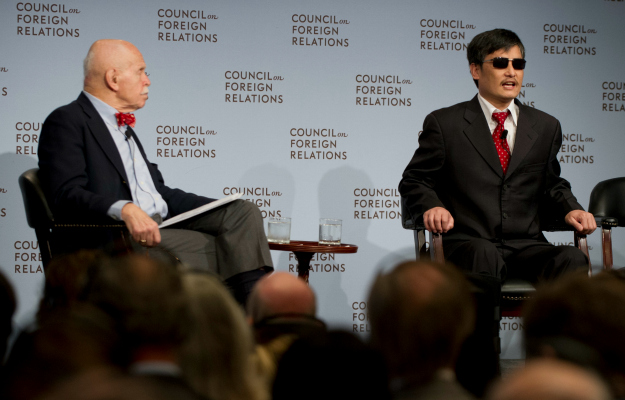 Foreign Policy: Jerome Cohen on Chen Guangcheng: ‘You Shouldn’t Bite the Hand That Feeds You’

In May 2012, Jerome Cohen, a professor of law at New York University, advised blind activist Chen Guangcheng on his negotiations with the United States and Chinese government, which ultimately resulted in Chen accepting an offer to be a visiting fellow at NYU law school.

Now Chen’s saga has taken another dramatic turn. On Thursday, the New York Post ran a story claiming that the university had “booted” the dissident in the face of pressure from the Chinese government over the school’s construction of a controversial branch in Shanghai. And on Sunday night, Chen stated that NYU did indeed urge him to leave (a claim that NYU denies). “As early as late August and September, the Chinese Communists had already begun to apply great, unrelenting pressure on New York University,” he wrote. “So much so that after we had been in the United States just three to four months, NYU was already starting to discuss our departure with us.”

In a phone interview with Foreign Policy on Monday, Cohen disputed Chen’s statement and the Post’s report. The interview is below, edited and condensed for clarity.

Foreign Policy: Is there any connection between NYU Shanghai and Chen Guangcheng?

Jerome Cohen: We’ve tried to keep it quite separate. I have not been involved in setting up the Shanghai campus — it was easy for me, therefore, to take on the Chen thing.

The irony of this whole thing is that I share a concern of [the Chinese government interfering in institutions] outside of China, but I always try to do it on the basis of evidence and facts. What concerns me here is that the New York Post, or something that Congressman Christopher Smith says, or NYU faculty opposed to [NYU President John] Sexton who don’t have anything to do with China, or Chen’s statement, no one has given one fact [to show that] Chen has been restricted or not done much at NYU. It’s all nonsense!

You shouldn’t bite the hand that feeds you. NYU has been extraordinarily generous to the Chens, and I’ve been grateful for the support.

FP: Why did Chen release a statement saying that NYU asked him to leave?

JC: I asked him to issue this statement [to express his views on what happened]. That said, he’s a special person, and he bears a certain resentment. He’s obviously being guided by people who have a different point of view than my own, and maybe they have information that I don’t have.

FP: What are your thoughts on NYU’s position in China?

JC: I might have advised them to go slower, or not go at all. This is an especially tough time in China right now. And the fact is [the university has] done it, and they’ve been careful, and it’s proceeded, and I don’t know how it’s going to work out.

You have to give them a lot of credit. Sexton could have said I don’t want to touch this thing. But they did. Of course, NYU, having established the branch complex in Shanghai, doesn’t want to take promiscuous risks.

But I hate malicious gossip. People just say things, they talk. It’s very unfortunate. If I had seen a basis for [NYU restricting Chen] at all, I would have been the first to raise the alarm.

FP: Would you call Chen mercurial?

JC: Chen is not a two-week wonder. We’ve had cases of great people who come here and they’re just gone in a short time — they have no clue on how to deal with a different society. Chen is unique and we have tried hard to keep him unique. I don’t know what will happen after this — it could hurt him with some people — but he has to learn that there are consequences of free speech. You can say anything in America, but you have to learn that it can come back and bite you.

My goal was to give him a year, one year in American life — what groups he wants to work with, and what groups he wants to avoid. I didn’t want him to get involved in the U.S. election and get used by one side or another. Now that that’s over, I figure increasingly he’s on his own — and he’s certainly taken part in all sorts of activities and had a widely busy schedule, making his own choices — and that’s alright with me. He’s a big boy!

I just felt in the early months so many people were trying to trick him and exploit him, and that he needed a few months to get on his feet.

FP: Chen is in talks with other U.S. institutions — what do you think is next for him?

JC: I don’t see any realistic prospect of [him] going back to China soon, and certainly the statements he’s been making cannot be helpful.

There is also the problem of his nephew locked up in China, and the rest of his family locked up back there. Recently, the application for passports for Chen’s older brother and their mother were suddenly approved. We don’t know why that’s the case, but maybe that’s a sign that the central government is suddenly coming to its senses.

When he came to the United States, it wasn’t clear that Chen was going to be a dissident. His whole appeal was for the Chinese government to live up to its law — not [to] overthrow the government. But what they’ve done this year is turned him into a dissident by mistreating his family — and it’s gotten worse recently. I’m not a professional anti-communist, but it’s sad. I hate to see Chen driven by the persecution of his family.