Four Uyghur men were arrested last Saturday in their apartment in Urumqi, the capital city of Xinjiang, for “engaging in illegal religious activity.” The local police confirmed the arrests to Radio Free Asia but refused to give any details.  An overseas Uyghur organization said that a “Hundred Day Crackdown” was launched in Aksu last week and so far 11 people have been arrested, including women, and that more than 20 people were fined for engaging in religious activities. 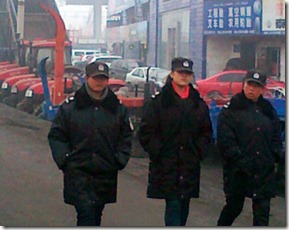 The religious faith of Uyghurs in China has always been a concern of the international community.  Recently, across most of Xinjiang, a severe crackdown has been launched on so-called “illegal religious activities.”  The authorities regard any study of the Koran done outside government-approved venues to be “illegal activity.”  On Wednesday, Dilshat, the spokesperson of the German-based World Uyghur Congress, told Radio Free Asia that at least four young Uyghurs were arrested recently in Urumqi for engaging in religious activities.  He said, “On the 26th, Urumqi police burst into Room 602, Unit 7, Building 2, on South Road in Dalan Town and arrested four people, accusing them of illegal scripture exposition and being engaged in religious activities.  Police beat and insulted them, confiscated some religious publications, and are holding them at the police station on Minghua Street.”  When our journalist called the police station, the police confirmed the arrests but refused to say how the case was being handled.


Reporter: Is it true that last Saturday, the 26th, four Uyghur men were arrested from Unit 7, Building 2 of South Road in Dalan Town?
Police: Yes.
Reporter: What were they arrested for?
Police: Teaching the Koran at an illegal location.
Reporter: How will this [case] be handled?
Police: Who are you?
Reporter: I’m a Reporter from Radio Free Asia.
Police: I don’t know.
As a warning, the authorities are fining people who study the Koran, Dilshat said, and so far 23 people have been given fines of 2,000 yuan to 5,000 yuan.  He said, “The Department of Public Health in the Yutian district of Hetian county issued a notice to investigate Uyghurs who wear veils.  They even set up a special task group to detain and investigate serious offenders.”   He also said that 27 retired Uyghurs officials in Hetian county were required to sign a statement pledging that they, as well as their spouses, children, relatives and friends, would no longer participate in religious activities.  The Land Resources Bureau of Moyu county issued a notice forbidding officials and employees, as well as their families and relatives, to wear veils and other clothing with strong religious connotations, or to engage in any illegal religious activities.  Offenders are subject to fines ranging from 1,000 yuan to 3,000 yuan.  According to Hetian city’s official website, the Yutian county Public Health Department is starting a special “unveiling” campaign within the entire countywide public health system.  It said that all public health agencies and all public places are required to become free of veiled women as quickly as possible.  Officials, employees and their families in educational institutions are not to wear clothes with strong religious connotations such as the “jilbab” [a traditional Islamic outer garment that looks like a long raincoat or trenchcoat].
Furthermore, the Aksu Daily reported last Friday that a “Hundred Day” special campaign had started on Nov. 20 and would continue to Feb. 28, 2012.  It bans illegal religious activities, further increases the intensity of the propaganda about the Communist Party’s ethnic and religious policy and other related laws and regulations, and safeguards religion and social stability.  Dilshat said that the crackdown had resulted in more than 10 arrests in the past week.  He said, “This crackdown targets religious Uyghurs to systematically suppress them, using methods that include thorough investigations and economic penalties for religious leaders.  The news we have gotten from the locals is that in the first week of the crackdown, 14 people were arrested in the Aksu area, 11 of whom are being held in local police stations, including four women.  One of the women is a 53-year old corpse-washer from Awat county.”  He also said that in Kuche county, Aksu, the emphasis is on banning “Illegal religion.”  He said,”Domestic Security Protection agents arrested three Uyghurs in that area, and the authorities accuse them of crossing district borders in engaging in illegal religious activities and carrying large quantities of religious publications across borders.”
The authorities’ main goal in the “Hundred Day” crackdown is to deter people from “engaging in illegal religious activities.”  A Xinjiang resident surnamed Li said, “Aksu and Kashgar are in south Xinjiang and have high concentrations of Uyghur population – controls have always been tight.  The definition set by the Aksu administrative offices of what constitutes religious freedom stems from the Communist Party; it’s not based on what the Constitution says about religious freedom.”  Dilshat thinks that the government’s intention is very clear.  He said, “The crackdown is clearly [meant to be] a provocation to the religious faith of the Uyghur people.  The government wants to achieve its goal of controlling the area by suppressing religious activities and systematically persecuting the Uyghur people.  I believe various forms of resistance will occur.”  Winter has already set in in Xinjiang, but the authorities are not letting their guard down at all, according to Mr. Li.  He said “It’s getting cold here.  Right now we are mostly seeing a lot of vehicles patrolling the neighborhoods.  There are a lot of police cars, SWAT unit vehicles and large trucks on the streets, while the number of beat cops has decreased somewhat.”
This report is by Radio Free Asia reporter Qiao Long.
http://www.rfa.org/mandarin/yataibaodao/weizu-11302011093954.html