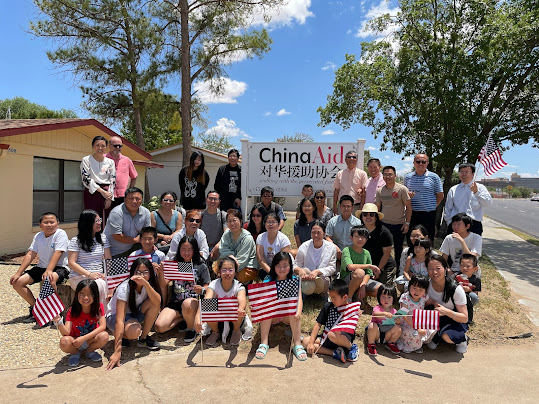 On July 9, 2015, the Chinese government arrested, summoned, and criminally detained more than 200 human rights lawyers, legal assistants, dissidents, and their family members across 23 provinces. This incident was known as the “709 crackdown” and attracted broad attention from the international community. Some of their families managed to flee China and came to America. Seven years later, ChinaAid organized a summer camp for family members of the persecuted lawyers who are still imprisoned or confined by the Chinese government. Altogether, 50 family members including children flew to Midland, Texas from all over the United States. They spent one week together on a ranch. Some of them previously communicated with each other over the Internet, but it was the first time they met face to face. After one week, they formed a 709 family the night before their departure. The purpose of the 709 family is to walk with God together, care for each other, raise godly children, and continue to support those who are persecuted by the Chinese government due to human rights and their faith.

During a devotion led by Pastor Bob Fu, he specifically talked about the traditional Chinese character “Yi” (meaning justified). This character consists of two parts: with the character “lamb” on the top and the character “me” at the bottom. The character “Yi” conforms to our Christian faith. We are justified through faith because of the sacrifice of the lamb (Romans 8:18-19).

Eight members of the camp were baptized after the devotion. The ranch has a replica of the Garden of Gethsemane built like an Israeli baptistery. Pastor Bob Fu and another pastor baptized speaking both English and Chinese.

Studying the Bible enlightened members of the camp. They consolidated their faith through the study of Psalm chapter 8, 19 and 23. God reveals truth to human beings through the nature He created, so sinners can imitate Jesus and his complete surrender to God’s love and justice on the cross, just like nursing babies fully trust their parents. With the authority in heaven and on earth that has been given to us (Matthew 28:18-20), and with the weapons of humility, love, and forgiveness, we can establish a stronghold against our enemies to silence the foe and the avenger (Psalm 8:2).

Mr. Sen-Hong Yang, a renowned radio host for Radio Taiwan International and a Christian journalist, held a morning devotion advising how to practically live a Christian lifestyle. He quoted former U.S. Ambassador Sam Brownback: “China is at war with faith, but it is a war they will not win.” The group discussed the inevitable crush of the Chinese Communist Party regime and how they should be armed with spiritual weapons. China is waiting to be revitalized by the Gospel. Thus, the evangelization of China is its only hope. The 709 family is determined to do anything to achieve this goal.

Action and love are important, but a walk with God is even more important (Micah 6:8). We must continually pray to God for wisdom.

Yang then cited Matthew 10:16: “I am sending you out like sheep among wolves. Therefore, be as shrewd as snakes and as innocent as doves.” All the 709 family accepted God’s calling and believed God prepared everything for them. They are ready to evangelize China and build a democratic free country.

During the study, they also talked about Mr. Lee Teng-hui (former President of Taiwan), who practiced the Christian faith throughout his life. When Mr. Lee became the president of Taiwan in 1987, he was surrounded by ill-willed ambitious politicians. Every evening, he and his wife Mrs. Tseng Wen-hui knelt in front of their bed to study the Bible and sought God’s wisdom to help them resolve tough issues. Through his 12-years of leadership, he managed to transform Taiwan into a democratic country. Mr. Lee wrote a book titled “A Witness for God: Lee Teng-hui’s Confession of Faith” which centers on God’s guidance for him and the challenges he overcame with God’s help.

Let God’s Will enter your heart every day and be a new creation. 2 Corinthians 5:17: “Therefore, if anyone is in Christ, the new creation has come: The old has gone, the new is here!”. This is how the 709 family was able to step out of the shadows. Although they were highly persecuted, they are filled with joy, just like how Paul and Silas responded to their situation in prison. Those at the camp responded to the Chinese Communist Party’s threat with smiles and songs because God has prepared a table before them in the presence of their enemies. (Acts 16:25; Psalm 23:5). This was their testimony to transform into a new person in the desert sun of Midland, Texas.

Many of these survivors experienced deep trauma from the Communist Party. They all received counseling and practical tools to address their mental health concerns, and those same tools are available in Life Above’s upcoming online seminar. Sessions begin July 25-30. If you or a loved one suffers from trauma or mental health issues like PTSD or depression, consider registering here.