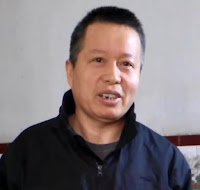 
(Yulin, Shaanxi—Nov. 10, 2015) In a letter to China Aid Founder and President Bob Fu on Nov. 3, Gao Zhisheng noted that the Chinese government appears to view any attempt by Gao to treat his teeth, which were damaged through torture and malnutrition during his time in custody, as a threat to national security.

Because of poor treatment by the Chinese government during his seven-year, off-and-on time in both official and unofficial custody, Gao has lost several teeth and the remaining teeth pain him daily. He has tried repeatedly to visit a dentist since his release on Aug. 7, 2014, but has been prevented, as is explained in the letter, below.

Gao’s legal troubles began in 2006 when he was sentenced to a three-year prison term and a one-year deprivation of political rights for “inciting subversion of state power.” He was then released on probation for five years. His seven years in and out of custody began in September 2007.

Thank you for continually showing concern for me, especially regarding my few famously damaged teeth!

I am very sorry that I have always not been able to give those who love me good news!

My wish to go to Xi’an to look after my teeth was like [the Chinese idiom], “Mirror flower, Water moon”—I could see my goal, but I couldn’t reach it. This is the second time since the end of August that the train ticket has been cancelled and refunded. I still hope you as a [Christian] brother will not be sad or dispirited about this matter or about the outcome of my damaged teeth. This attempt to look after my teeth unexpectedly raised the issue of “national security,” which is not easy to stand up against. Local authorities presumed I would act afraid this time.


When all is said and done, it is in the “the world’s second largest superpower” that numerous teeth are damaged, that there was a seven-year tug-of-war, and that other incomparably “great acts” are endured. [Editor’s Note: Gao uses the phrase “the world’s second largest superpower” to describe how he believes the Chinese government views China. Gao uses “numerous teeth” to exemplify the many chronic injuries inflicted upon Chinese prisoners during imprisonment. The “seven-year tug-of-war” refers to the length of time Gao was in and out of detention.]

If teeth have emotions, then being my teeth is really unbearable. Especially in 2009, these teeth experienced surprising and startling pain. When I was secretly jailed at a military site, I was tortured by the same group of men who carried out my torture in September 2007. In captivity, during the daytime, I wore a thick, black hood and my hands were handcuffed behind my back (Before night came, my hands were handcuffed to the front of my belt.). Often, people would come without saying anything, just hit my face alternatively on the left and right. Only a man nicknamed “Zhong Ba Jun” [Editor’s Note: This is a nickname literally meaning “Heavyweight Eight Ruler.”], who was open and honest, took off my hood every time and counted the times he hit me. The greatest number [of strikes] he ever inflicted at one time was just less than 60. At that time, my body could no longer feel pain. My awareness was also fuzzy and too much to bear, but I still remember hot mucus flowing out from my mouth. The pain my teeth were subjected to was great.

I understood they had commands from Beijing. The leader of Shaanxi’s Domestic Security Protection Bureau still has the mind of an ordinary person; this has been my painful experience these years. On Nov. 8, 2009, local authorities in Beijing secretly handed me over to the Shaanxi Domestic Security Protection Bureau. Before, I was in Xinjiang, continuously wearing an unlined garment; that kind of experience is unforgettable. After the Shaanxi police took over, they prepared a few sets of clothes for me so that I could have something warm to wear. During the time I was imprisoned by the Yulin Military [in Shaanxi], (which the Domestic Security Protection Bureau and the soldiers watched together), they at least gave me some respect and humane treatment. There wasn’t one word of disrespect (The type of hellish imprisonment I received at the military facility in Yulin was planned and arranged by a person who came from Beijing.). The style of the secret police in Shaanxi is different from Xinjiang’s ignorant, callous style, which is, itself, different from the secret police of Beijing’s underlying wickedness. Therefore, I believe that this time [by denying treatment for my teeth] the despicable, terrifying great feats were made by Beijing’s evil intentions.

Yet, [I believe] in about two year’s time, this current global scandal will be corrected as this sinister regime will historically collapse and die. The totalitarian state, in this last second before its death, tries to show the people of the world that it is still strong. In the coming years, this evil regime will still be strong; this sinister colony can still be powerful, not only as “the world’s second largest superpower,” but also as a “responsibly acting body,” [as was] recently pronounced by German Chancellor Angela Merkel [Editor’s Note: This quote from Angela Merkel appears in Chinese media.] All these will encourage them to hold onto their darkness until the Party’s collapse in 2017. In the time before the [Communist Party of China’s] death, it will callously defend its own cruel methods, yet their entire beloved system attacks the past. Undoubtedly, they will still have their accomplices—corrupt, filthy, fat officials who embrace their multiple mistresses.

This is an unprecedentedly dawdling, stubborn and obstinate group in mankind’s history—always accepting injustice. They often complain without reason, saying they face “hostile forces,” which “have an ulterior motive” and “defame China.” [The Chinese government’s] shamelessly hyperbolic outlook—which causes people’s eyes widen in shock—makes [officials] believe their country still possesses something worthy of being discredited.

Being barbarous and violent is the bones of the totalitarian system; shameless lying is their skin and bones. When there comes a day with no more lying, people will only be able to see the pile of ugly bones. When all is said and done, there is no understanding, just repeating over and over that they are “the world’s second largest superpower,” and adding that they have a “responsible behavioral style.” When, just a short while ago, a common person’s teeth are destroyed and lost, [the attempt to correct the damage] is deemed a matter of “national security,” persisting for seven years. Dauntlessness like this never diminishes.

Brother Fu, the on-site political actions are mysterious and deep and have no crux. My eyes were closed to this mystery for many days, so I could not even [grasp] the gist of the idea.

Brother Fu, the outside world can speculate that because I cannot treat my teeth, I must always be in a mood of personal, bitter hardship and torture. This is not entirely true. The world I find inside books occupies me to the point that I forget to eat. I do not even have the leisure to negotiate [with the police] regarding my suffering. (To me, it is incredibly precious that I now have books to read. Generally speaking, I know I will disappear immediately again after my book is published. So I am determined to try my best to read more books. This is something I need to do before this happens. This is very crucial to me.)

My relatives rose up early this morning and my family members suffered when they went to the train station to refund my ticket. I write this because I am so emotional about the incident. Don’t let it bother you!

I wish you well!
May the Lord’s peace be with you!