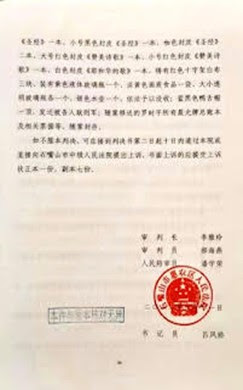 Geng Zejun sentenced to over a year

Geng Zejun and his
congregation belong to the reformed faith and have refused to accept the
management of the Chinese Communist Party-controlled Three-Self Patriotic
Movement Church. They never gave up on meeting together despite the
government’s constant suppression. On December 5, 2021,
they held a Sunday service in a remote single-story house in a local water
plant in Huinong district. Local state security personnel, police from the
neighborhood police station, and personnel from the Religious Affairs Bureau
raided their gathering. The authorities used “illegal Christian gatherings” and
“severely disrupting the social order” as reasons to take the church attendees
away for questioning. The next day, Geng Zejun was placed in
administrative detention for 15 days in the name of “disrupting social order.” Police detained Geng’s wife Hao Ying and five other believers for
10 days and released them on bail pending trial. Two weeks after his release, Geng
Zejun was summoned again by the police on January 4, and the authorities detained
him on suspicion of “organizing illegal gatherings.” Geng was formally arrested
on January 25 and has been detained to this day.

On July 13, officials conducted proceedings via video. Geng Zejun attended
the trial in the detention center. The trial lasted nearly seven hours.
He refused to cooperate with the authorities to plead guilty. His lawyer defended his
innocence. The court suggested a sentence of 11 months. A verdict was expected to be issued half a month later. His wife Hao Ying
was unable to appear in court.

Preacher Geng Zejun
is 50 years old. He was diagnosed with rheumatic heart disease when he was 12. His mother, also a Christian, brought him to a large hospital in
the capital Ningxia province for treatment. The doctor gave her
a critical condition notice and gave up any further treatment. She did not give
up on her son. She prayed to God and asked fellow Christians to pray for him.
She prayed continuously day and night. On the morning of the 8th
day, he was completely healed and energetic like he had never been sick.

Geng Zejun began to serve the Lord 15
years later in 1995. He quit his job to study the Bible and preach. Geng could not attend seminary because of the government’s continuous monitoring, so he bought many Christian books to study at home. Local police
arrested him the next year during a gathering in a rural area of Yinchuan city.
He was administratively detained for eight days under the charge of “disturbing
social order.” His shoes and clothes were all robbed by other prisoners. But
God was with him. Geng did not fear nor compromise in the detention center.

Authorities sealed Church of the Rock on December 27, 2019, after a
pastor of local Three-Self Church reported them. Police officers, national
security agents, staff of religious affairs bureau, and local community
management office gave them a joint verbal notice to ban the church. Thanks to
God’s protection, the church was able to continue to gather despite the
pressure of the government and the COVID pandemic. The number of Christians
even reached 130.

“Please pray for God to comfort and strengthen him,” Hao Ying wrote. She released a public prayer letter for her husband’s recent sentence:

Christ suffered for us, so we will follow his footsteps! Although
we are surrounded by hardships, God’s grace is enough! Also pray for our
church. The government has verbally banned our church, but God will protect his
people! Pray God to give us firm faith and determination to follow Him!