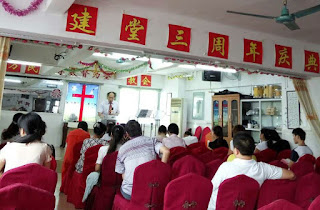 (Wenzhou, Zhejiang—July 1, 2016) Authorities in China’s coastal Zhejiang province recently demanded that some churches hand all their income, including donations, to the government as part of a movement to implement more official regulations.

Since last year, the Chinese government has been pressuring churches to implement the “five transformations,” which consist of “localizing religion (through adopting local architectural styles for church buildings), standardizing management, indigenizing theology (by contextualizing sermons), financial transparency and adapting Christian teachings,” in order to mold Christianity into an institution that reflects the objectives of the Communist Party. As a result, the government established office spaces within churches and assigned officials to closely regulate them.

Government departments implemented new rules for churches in Pingyang County, Wenzhou, including that they must submit all of their donated money to the authorities. A local Christian said that, “… the government officials will interfere with church affairs, managing our donations and some large-scale projects. We have to obtain their (the government’s) permission if we would like to buy equipment or decorate the church. We will have to ask for permission for any expenses more than a few thousand yuan.”

In July 2015, the local government began arranging for officials to speak at church services and set up tables for them in the churches. On Aug. 30 of the same year, authorities ordered that government personal supervise every church in Wenzhou.

According to an unconfirmed report, the local government is now requiring churches to fly the official Chinese flag on top of their buildings—where many of them displayed crosses before the actions of an ongoing cross demolition campaign—and place it on their pulpits.

China Aid reports on abuses, such as those experienced by Christians in Wenzhou, in order to promote religious freedom and rule of law in China.