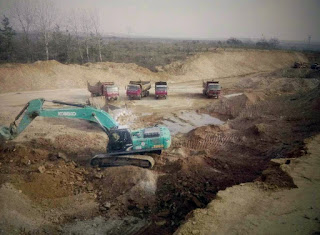 A local Christian woman identified only by her surname, Yang, said the government dispatched a large group of demolition workers in June 2016 and used bulldozers to claim 90 percent of land owned by residents in Yangjiazhuang Village in order to build a highway, totaling 49 acres. Many of those taken from were Christians.

One church member, Yang Jiuhao, lost more than half an acre of his property and more than 200 apple trees.

Outraged, the villagers, including some Christians, traveled to Beijing several times to petition higher authorities, but their requests were ignored. The government in their local village hired gangsters to follow them everywhere they went, including into their fields and to the court.

In response to the villagers’ request to publicize information regarding the highway, the Ministry of Land and Resources released a statement on April 13, claiming that the victims’ land was not part of the Qingdao Laixi section of the highway project. As a result, the villagers pressed an administrative charge and demanded that the officials return their land.

Despite the ruling, the government has only offered to give the residents 800 yuan ($118 USD) per every sixteenth of an acre annually for the next 30 years.

ChinaAid exposes abuses, such as those suffered by the Yangjiazhuang Village residents, in order to stand in solidarity with the persecuted and promote religious freedom, human rights, and rule of law.