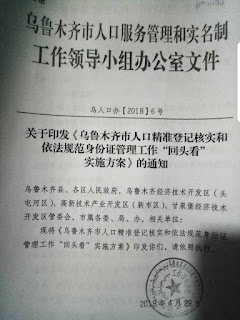 
(Urumqi, Xinjiang—May 25, 2018) The government of Urumqi, the capital of Xinjiang, issued a notification requiring the local governments to register and monitor ethnic minorities through the “Retrospection Leadership Group.” The World Uyghur Congress accused the Chinese government of adopting hostile policies targeting the Uyghur people and urged the Xinjiang government to revoke the discriminating regulations.

According to a notification titled “The Bidirectional Control Working Plan of the Special Personnel, Students, and Government Officials,” issued by the Stability Maintenance Headquarters in Urumqi on May 3, the governments of the districts, the sub-districts, and the counties should put the personnel under government surveillance and conduct the “bidirectional control.” The details of the notification remain unknown.

Another document titled “Document from the Leading Small Group of the Urumqi Municipal Population Affairs Management and Identification Work’s Office” by the World Uyghur Congress stipulated the exact plans, tasks, and goals of the operation. The government officials should be precise with the information collected and try their best “never to repeatedly register or forget a single household, person, or item.”

In addition, the government appointed the mayor of Urumqi as the director of the new “Retrospection Leadership Group” empowering him to monitor the progress of the operation. He would be responsible for “obtaining the precise information” and monitoring the registered personnel.

The confidential government document indicates that the main tasks of the operation are investigating the local households, taking note of any discrepancies in the registration, and searching for emigrated personnel and missing people. The local officials should precisely register the education, marital condition, blood type, military service, and the spouse’s information.

ChinaAid is committed to exposing oppressive acts against minority groups, such as the Uyghur, in order to promote religious freedom, human rights, and rule of law.