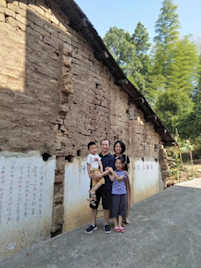 (Chengdu, Sichuan Province—Oct. 5, 2020) On September 27, 2020, six policemen from the Public Security Bureau of Chengdu visited Elder Yingqiang Li and his wife from Early Rain Covenant Church of Chengdu, and warned, “Chengdu does not welcome you. Chengdu people do not welcome you.”

“Wang Yi has been put in jail,” officers said. “He is the first, and you are the second.”

As Elder Yingqiang had hoped to have positive communication with officials and avoid conflict, he reassured police that he believed in Christ and wished to bring blessings to Chengdu.

Police also told Elder Yingqiang that they may take measures, including but not limited to strict surveillance and tracking, “legally, and “legally”* deprive them of custody of their children.

Officials had released Elder Yingqiang earlier in August 2019 after detaining him for eight months during the 12.9 Persecution. During August 2020, Elder Yingqiang and his family returned to Chengdu and rented an apartment.

When three policemen from Caotang Road, Qingyang District, Chengdu came to Elder Yingqiang’s home, they reported that according to some residents’ tip-off, strangers now lived in their rented apartment and that they needed to investigate the situation.

Besides, staff from the Bureau of Education told Elder Yingqiang and his wife that they had violated the Compulsory Education Law since they did not send their school-age children to public school. When the Bureau of Education staff told Elder Yingqiang and his wife that the relevant government departments could deprive them of their status of guardians and send their children to public school, Elder Yingqiang replied, “As long as we remain guardians of our children, we will not allow our children to receive atheistic education.”
Elder Yingqiang emphasized that even according to Chinese law, Christians had the right to homeschool their children. If relevant governmental departments insisted on interpreting and enforcing the law selectively, however, he could say nothing more. He and his wife would be prepared to pay any price.
After staff read a few articles of Chinese law, they asked Elder Yingqiang, “Have you organized any illegal religious activities?”
Edler Yingqiang replied, “I just announced the gospel of the kingdom of Heaven, a religious activity, to you. You may judge whether it is illegal.”
(Photo: Elder Yingqiang Li’s Facebook)
Elder Yingqiang later posted on Facebook, “I pray for the leaders and policemen of the Public Security Bureau of Chengdu, that through their contact with the church, may the Lord make them know God Who created Heaven and Earth; Who governs everything. May they know Our Lord Jesus Christ, Who shed blood and died to set sinners free from their sins. May God save His own people from police and civil servants who persecute His church.”
(Report by Yubing, special correspondent of China Aid)
* Note: “legally” intentionally used twice here. Officers stressed that the law would support their actions.