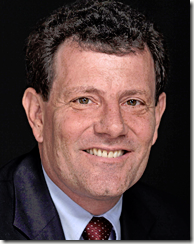 By NICHOLAS D. KRISTOF Published: April 27, 2011  SHANGHAI
Since China is in the middle of its harshest crackdown on independent thought in two decades, I thought that on this visit I might write about a woman named Cheng Jianping who is imprisoned for tweeting.
Ms. Cheng was arrested on what was supposed to have been her wedding day last fall for sending a single sarcastic Twitter message that included the words “charge, angry youth.” The government, lacking a sense of humor, sentenced her to a year in labor camp. (Picture: Damon Winter/The New York Times  Nicholas D. Kristof)

So I tried to interview her fiancé, Hua Chunhui, but it turns out that Mr. Hua was recently arrested and imprisoned as well. That’s the way it goes in China these days. The government’s crackdown is rippling through the country, undercutting China’s prodigious growth and representing the harshest clampdown since the crushing of the Tiananmen democracy movement in 1989.
The reason? Surprising as it may seem, the government is worried that China could become the next Egypt or Tunisia, unless security forces act early and ruthlessly.
“Of course, they’re scared that the same thing might happen here,” one Chinese friend with family and professional ties to top leaders told me. A family member of another Chinese leader put it this way: “They’re just terrified. That’s why they’re cracking down.”
Yet another official says that the Politburo internalized a basic lesson from the Tiananmen movement: It’s crucial to suppress protests early, before they gain traction. He says that from China’s point of view, the mistake that autocrats in Egypt and Tunisia made was not cracking down earlier and harder.
Paranoia also plays a role. Some Chinese leaders believe that America is nurturing a movement to subvert the government. Chen Jiping, a senior official, expressed this fear when he warned recently against “hostile Western forces attempting to Westernize and split us.” China, for a time, even blocked access to the blog of the outgoing American ambassador, Jon Huntsman Jr.
In truth, the differences with Egypt and Tunisia are profound. China’s leaders may be just as autocratic as those in the Middle East, and just as corrupt, but they’re far more competent. They’ve overseen astonishing improvements in the standard of living, in education, in health, in infrastructure. But I don’t want to get ahead of myself: That’s the topic of my next column.
Another reason for the crackdown seems to be jitters over the transfer of power next year. President Hu Jintao, who seems, to me, to be the least visionary Communist Party leader since Hua Guofeng in the late-1970s, is expected to step down and be replaced by Xi Jinping, the current vice president. Officials say that the plan is for Li Keqiang to be prime minister and Wang Qishan (perhaps the ablest of the three) to be deputy prime minister.
But there is still jockeying, partly because President Hu is weak. Chinese officials are remarkably open about criticizing Mr. Hu, and the critics are said to include the military brass and former President Jiang Zemin. The complaints have little to do with the crackdown on dissent (“That’s just a very small issue to them,” one Chinese official explained to me), and more to do with the way Mr. Hu has frozen or backtracked on economic and political reforms, allowed inflation to stir and harmed relations with the U.S.
Many ordinary Chinese seem to feel the same way. Most Chinese I have talked to don’t care much about dissidents; their main concerns are inflation, corruption and better jobs. Moreover, they feel freer in their daily lives — so long as they don’t challenge the government, it mostly will leave them alone.
Still, the crackdown represents a great leap backward, and it is particularly nasty in two respects.
First, the government is arresting not only dissidents and Christians but also their family members and even their lawyers. Second, after a long period in which police would torture working-class prisoners but usually not intellectuals, the authorities are again brutalizing white-collar dissidents.
One lawyer, Gao Zhisheng, was arrested and, by his account, subjected to beatings and electric shocks because he had represented Christians and dissidents. After a brief stint of freedom nearly a year ago, he apparently was arrested again and vanished. In China, “disappear” has become a transitive verb.
The crackdown has extended to the Internet. My teenage daughter, with me on this trip, complains that in China “everything is blocked.” By that, she means that Facebook and YouTube are walled off, access to Gmail and Google searches comes and goes, and even her homework on Google Documents is inaccessible.
Here we have a country that is coming of age, with an economic rise that is pretty much unprecedented in the history of the world — and it tarnishes those achievements with a harsh crackdown. For those of us who love China and believe in its future, this retreat is painful to watch.
I invite you to visit my blog, On the Ground. Please also join me on Facebook, watch my YouTube videos and follow me on Twitter.
A version of this op-ed appeared in print on April 28, 2011, on page A25 of the New York edition with the headline: Great Leap Backward.
http://www.nytimes.com/2011/04/28/opinion/28kristof.html