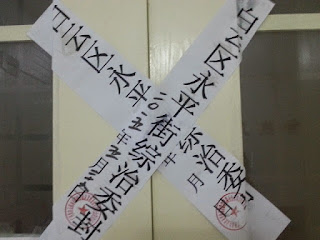 China Aid
Reported and written in Chinese by Qiao Nong. Translated by Carolyn Song. Edited in English by Rachel Ritchie.


(Guangzhou, Guangdong—Sept. 8, 2015) On Aug. 15, Guangzhou Guangfu House Church was again raided by the Baiyun District Public Security Bureau officers who never presented identification during a gathering of more than a dozen church members at a rented meeting place. Police and guards broke into the house, stating that to the church members’ gathering was illegal, recorded all the attendees’ ID information, and took the church’s pastor to the police station for several hours.

Pastor Ma Chao told China Aid’s Hong Kong reporter, Qiao Nong, that he had just finished preaching and began to end the service with a prayer when more than a dozen police and guards broke into the meeting place, asking all the church members to register their ID information. Police also claimed that Ma’s bag contained dangerous contents and must be searched.

Ma said, “We rented another [meeting] place because our previous meeting place cannot be used since the police confiscated everything. This [meeting on Aug. 15] was the second meeting in the new space; about 20 police and guards broke into the house as soon as we finished our service. We were asked to show our photo IDs, and we did. They said there was suspicious stuff hidden in our meeting place and that they needed to search our place. I asked them if they had a search warrant. They said that police permission is also sufficient. I was forcibly taken to the police station on Yongping Street [in Baiyun District].

A prior incident of persecution against Guangfu House Church occurred on July 23 when authorities searched the church’s previous meeting place and confiscated all their possessions. At that time, about 50 officers from the religious affairs bureau, the police station, and officials from a Baiyun District subdivision burst into the house, taking away computers, televisions and cameras—almost all the belongings the church possessed. Ma’s wife, associate pastor Wu Qiyou, and a deacon—a total of four people—were taken into custody for several hours before being released that evening.

Ma Chao said that among the people raiding the church, no officials from the local religious affairs bureau or the subdivision’s government accompanied the main body of officers from the public security bureau.

When the police brought Ma to the police station in Yongping Street, he was put in a holding cell with a group of fighters, drug addicts and prostitutes, he said. During this time, Ma asked the officers to show the written summons notice for his apprehension, but the police officer named Lin left the police station, saying he was off duty and called another officer to tell Ma that they would get the summons notice. But after a while, the police told Ma they didn’t have a notice.

“I said, ‘If you have a search warrant and summons notice, [this is legal]. If not, you were not qualified to search our church.’ He said, ‘We have regulations and are authorized to search suspects for dangerous weapons.’ They left me alone after taking me to the holding cell and just kept me together with the prostitutes, drug addicts and the fighters from 9 to 11:30 a.m.”

A Guangfu House Church missionary told Qiao Nong that about 20 Christians were at the service that the police called an illegal gathering. “About 21 people were at the service. Around nine o’clock, when we were almost finished, the police broke into the house and said we were gathering illegally. They required [us to present] our photo IDs and took away our pastor.”

Qiao Nong: How many people were taken away?

Guangfu House church has suffered forcible search and confiscation many times since May 2015. The church’s belongings were taken away, and the door of the church was sealed twice. On May 22, the church received an order to cease all “illegal religious activities”; otherwise, the church would be banned in accordance with the relevant provisions of “Religious Affairs Bureau Regulations.”

On May 24, Yu Guigang was sent with 100 local police officers, who, without showing any official documents, confiscated computers, speakers, books and other items and took Ma for interrogation for hours. On May 31, more than 20 church members gathered at the gate of the closed church and were dispersed by 20 persons led by the officials and party secretaries from the local religious affairs bureau and the government of a Baiyun District subdivision.