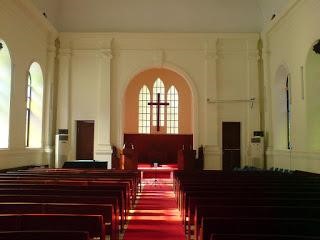 Guangzhou Christian bookstore displays The Governance of China by Xi Jinping, as well as the CCPs “Little Red Book”

(Guangzhou, Guangdong Province—May 05, 2021) The bookstore of Sha Mian Tang Church, a well-known Christian church in Guangzhou City, Guangdong Province, displayed a large number of the book, The Governance of China, written by Xi Jinping, as well as the Chinese Communist Party (CCP)’s “Little Red Book.” Sha Mian Tang’s gospel bookstore, however, did not display any collections of gospel books.

The picture of Shamian Christian Church’s bookstore revealed that someone had prominently positioned The Governance of China and other “red” publicity works in the most noticeable sections of the store’s three bookshelves. Red, a symbolic color, marks the CCP’s Revolution, the Left, Socialism, and Communism.

The Governance of China features a collection of Xi Jinping’s reports, speeches, conversations, instructions, and congratulatory letters, collected from the beginning of his regime. CCP professionals, not President Xi, wrote and organized the collection thematically. These annotated volumes of collections also include photos of Xi Jinping during his tenure as China’s ruler. 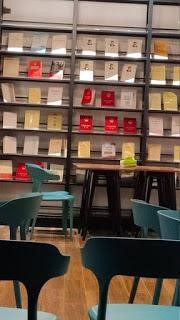 Shamian Church prominently displays a large number of Xi Jinping’s books.
(Photo: Yu Jie)
The CCP’s central publicity department, the Communist Party organization, along with other departments have ordered all regions and departments to sternly implement as well as carry out the instructions and knowledge acquired from “President “Xi.” All levels of the Party’s organizations, Party committees, Party schools, Cadre Schools, and media departments must develop seminars and educational activities. To further promote education among all Chinese citizens, an official saying evolved: allow knowledge to “fly into the ordinary/common people’s homes” (from an old Chinese poem).

According to reports, the Party’s Administration for Religious Affairs organized Christians to study The Governance of China. Jiangsu Nantong Christian Church had organized church pastors/leaders to learn information in this book. Each of those who participated in the study needed to speak about their own learning experience. The report stated: “Everyone unanimously agrees to run Nantong’s Church well. It is imperative to learn General Secretary Xi Jinping’s speeches.” The Zhongshan Ethnic and Religious Bureau of Guangdong Province also organized for those in the religious sector to study The Governance of China and insisted that they host workshops/seminars on Sinicization of religion in China.

In some provinces, such as with the Jiangxi Catholic Church, CCP authorities have removed icons and crosses to replace them with a portrait of Party’s General Secretary, Xi Jinping’s—right in the middle of the church. Ironically, this church’s library does not even own a Bible— but has filled shelves with the works of Xi Jinping.

The CCP forced the church to accept the official socialist core values, going as far as attempting to control and influence the thoughts of Christian citizens through the means noted, and to bring the Christian church in as a subordinate group under the CCP. Due to the profoundness of Christian doctrines and traditions, many Christian churches have refused to blindly follow this protocol. Nevertheless, in response to the government’s forceful actions, some churches have superficial followed official instructions. Simultaneously, many religious personnel holding positions in official churches have chosen to give in to those demands.

David Meng, a visiting scholar in the US, and a pro-democracy activist, has closely monitored Chinese religious law and policies. He said regarding this issue:

China has a saying “birds of a feather flock together,” and in the Bible, it states “render to Caesar the things that are Caesar’s and to God the things that are God’s.” In today’s China, the Christian Church’s bookstores are filled with books “written” by the Party’s leader Xi Jinping and other Communist China’s red ideology books. This is the typical “Dove occupying a magpie’s nest.”

This CCP’s rationale will not only fail to engage Christians, instead, it adds a sense of detest. The leading cause of the issue originates from the significant retrogression of China’s religious management system since Xi Jinping gained power. China’s religious management department deviated from the government’s sequence, openly becoming the direct subordinate of the United Front Work Department (atheistic in its nature). It became directly under the management of the CCP, a typical example of the government interfering and taking things into its own hands.

The Church of England initially built Shamian Christian Church, previously located in the Shamian Guangzhou British Concession, as a place of worship for British expatriates. The Qing Dynasty founded the church in 1864. Under the jurisdiction of the Anglican Victoria Diocese, and historically called the Guangzhou Foreigners Church or Anglican Church, situated at the western part of the concession, it became a public place of worship for foreigners. A British pastor presided over the church and preached sermons in English. After 1949, however, the CCP commandeered the church.

In 1989, the CCP relinquished the church’s administration to the Guangdong Committee of the Three-Self Patriotic Movement of the Protestant Church and Guangdong Christian Council. After significant renovations, the church resumed services in 1991. From 1994 to 2001, as Shamian Christian Church served as the location for the second campus of Canton Union Theological College, it became a “cradle” to cultivate clergies.

###
Your glorying is not good.
Do you not know that
a little leaven leavens the whole lump?
~ 1 Corinthians 5:6 (NKJV)
China Aid exposes abuses in order to stand in solidarity with the persecuted and promote religious freedom, human rights, and rule of law. If you wish to partner with us in helping those persecuted by the Chinese government, please click the button below to make a charitable donation.