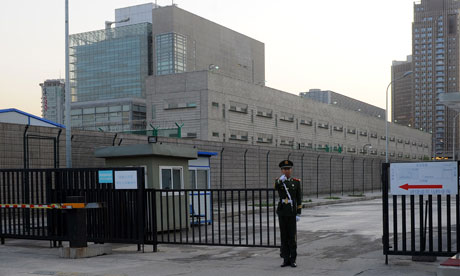 It could hardly have come at a worse moment for a ruling Communist party whose public affairs seem to resemble a mafia war more each day.

The extraordinary escape from house arrest of one of China’s most famous legal and human rights activists, blind lawyer Chen Guangcheng, has all the elements of a police thriller. His astonishing appearance on YouTube provides a reminder of everything the party propaganda machine has tried to play down in recent weeks: police torture, arbitrary detention, abuse of power and the lack of legal protections.

Pro-government media in China this week have followed the party line that all is calm, constitutional and legal in the aftermath of the spectacular fall of Chongqing’s party secretary Bo Xilai and his wife’s arrest on suspicion of murdering British businessman Neil Heywood earlier this month. The pro-government newspaper Global Times on Wednesday accused western media of sensationalism in their reporting of a story that has repeatedly threatened to escape from China’s normally effective government control. “Western disclosure attempts cannot be more authoritative and detailed than the investigation of the central government … waiting for the final results and interpreting Bo’s case based on the authoritative information should be the rational attitude to take,” the paper advised.

But assurances of the integrity of Chinese law were exploded in another case on Wednesday when the former head of China’s football association, Xie Yalong, on trial for match-fixing and soliciting bribes, accused the police in Liaoning province of torturing him into a confession. The police were forced into an unconvincing public denial and accused Xie in turn of trying to confuse public opinion.

Barely 24 hours later, the news broke that Chen had evaded 90 guards under cover of darkness on 22 April and disappeared, only to reappear on YouTube vowing to stay in China and to fight for the freedom of his family. Chen, who is 41 and a Christian, has long been a cause celebre for human rights activists. Blind since childhood, he was not allowed to attend school, but taught himself enough law to fight for justice for women forced to undergo abortions by zealous officials carrying out China’s one-child policy.
His campaign had an effect, but he was sentenced to four years in prison in 2006 on charges of “disturbing public order” and has been under house arrest in his home village in Shandong province since his release in 2010. House arrest is one of a range of extra-judicial measures increasingly used against human rights lawyers in China.
Other sanctions include disappearance, arrest and alleged torture, and removal of a licence to practise. Lawyers who take up cases unpopular with the government, such as the defence of Falungong practitioners, have found themselves imprisoned with their clients.

Since Chen’s release, the authorities have held him under heavy guard to isolate and silence him. Now Chen has publicly accused the authorities of torture. “My mother, my wife, my child are still in their clutches,” he said, calling on Premier Wen Jiabao to protect them from the “mad revenge” of the security forces.

Chen’s whereabouts remain a mystery. In an interview with the Wall Street Journal, Bob Fu, president of the US-based Christian human rights group ChinaAid, confirmed that Chen escaped on 22 April and said the activist was now in Beijing in a “100% safe location.”

The Christian underground in China may be sheltering him or he may, as also reported, be under US government protection: the US embassy in Beijing has declined to comment on reports that he has sought refuge there. In February, Chongqing’s former police chief, Wang Lijun, fled to the US consulate in Chengdu, precipitating the continuing Bo Xilai scandal, but was refused asylum. If Chen is under US protection, there will be pressure to take a more sympathetic view of this celebrated human rights defender than of a police chief who is himself accused of torturing his victims.
Chen’s case is likely to be a continuing embarrassment for the Chinese government, itself in the grip of a power struggle as President Hu Jintao prepares to step down later in the year, along with six other members of China’s ruling body, the politburo standing committee.