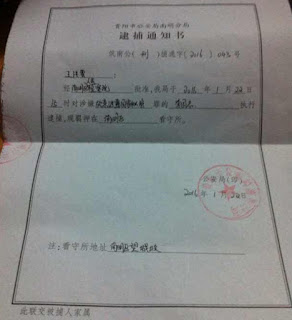 (Guiyang, Guizhou—Jan. 22, 2016) After serving two administrative detention and one criminal detention sentences, the pastor of a house church in China’s southern Guizhou province was arrested on suspicion of “divulging state secrets” today, shortly after officials rejected his colleague’s administrative reconsideration application on Jan. 11.

Li Guozhi, also known by his alias, Yang Hua, was last seen donning a black hood as officials herded him into an unidentified vehicle. As a pastor of Huoshi Church, which the government has been serially targeting, he was detained twice consecutively for a total of 10 days.

According to previous notices delivered to family members, Li originally served time in administrative detention for “the crime of obstructing justice” and “gathering a crowd to disturb social order.” On the day he was scheduled to be released from his second administrative detention in late December, authorities added the charge of “illegally holding state secrets” and transferred him to criminal detention.

Following another accusation that Huoshi Church had been using its venue to hold religious activities while it was not authorized to do so, officials imposed a fine that began on Nov. 22, even though the church consistently reported all religious events to the government. The original notice, delivered on Nov. 18, informed the church that they had three days to comply with legal stipulations, otherwise, a fine of 10 Yuan [U.S. $2.00] per day for every square meter of church property would be imposed.

After the church refused, the Guiyang Municipal Urban Management Administrative Law Enforcement issued an administrative penalty notice to church members Su Tianfu, Zhang Xiuhong, and Liang Xuewu, under whose names the venue is officially registered, stating that the church had 15 days to pay the fine. If they failed to do this, an additional 3 percent per day charge would be added to the overall expense, totaling 110,296 Yuan (U.S. $16,768.00).

Su, who is a pastor at Huoshi Church, informed a China Aid reporter that he had applied for an administrative reconsideration: “… otherwise, we don’t have the money to pay the fine.”

On Jan. 11, the Guiyang Municipal People’s Government rejected his application.

A translation of Li’s administrative reconsideration application is forthcoming. 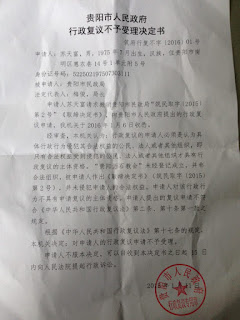 If the applicant does not accept this decision, he can bring an administrative lawsuit to the People’s Court within 15 days of receiving this written decision.

Su Tianfu, Zhang Xiuhong, Liang Xuewu:
According to the Law on Urban and Rural Planning for Guiyang Municipality, we have investigated your case of changing the regulated usage of rooms without permission. The investigation is already completed. 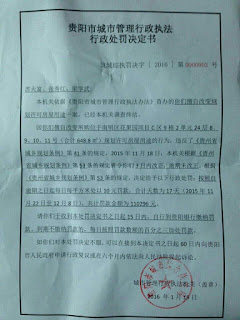 You must pay the fine at Guiyang Bank within 15 days of receiving this verdict. If you refuse to pay the fine within the prescribed time limit, an extra 3 percent of the fine will be imposed each day.

If you are not satisfied with the decision, you can apply to the Guiyang Municipal People’s Government for an administrative reconsideration within 60 days of receiving this verdict or file an administrative lawsuit at the People’s Court.