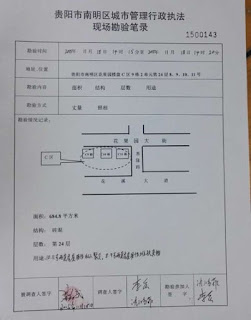 (Guiyang, Guizhou—Dec. 1, 2015) Authorities in China’s inland Guizhou province accused the pastor of a house church of “changing the usage plans” for the facility in which the Christians meet, demanding, in some documents, that the pastor demolish the building by last Saturday or face an investigation into the group.

Pastor Su Tianfu provided China Aid four legal documents and his account of the events that took place on Nov. 16-17, below, to expose the unreasonable actions carried out by officials from the Nanming District branch of the Guiyang Municipal Government.

Su, the pastor of Huoshi Church, first received an administrative penalty notice on Oct. 21, stating that certain rooms of a building listed under Su’s name were approved only for business operations but were being used for illegal gatherings. Furthermore, the document gave Su until Nov. 21 to return to the approved usage of the rooms or he would be fined 20 Yuan (U.S. $3) per square meter, a total of 12,960 Yuan (U.S. $2030), daily.

Then, on Nov. 16, while Su was taking his ailing mother to see the doctor, he received a phone call from a Nanming District official, who told Su to go to the government office at 2 p.m. to discuss the ongoing investigation. Su asked if he could reschedule for the next day and was told later, when the official called back, that he “must come at once.” Su, for lack of a better choice, left his mother, whom he had just been informed would be hospitalized, and went to speak with officials. Once there, officials again accused him of misusing his building, which Su refused to acknowledge.

The next day, as Su rushed to the hospital to see his mother, whose condition had worsened, he received phone calls from the Nanming District officials, demanding that he meet them at his building. When he responded that he could not be there, officials proceeded to go to Su’s home and demand that his wife sign documents and turn over various information. (A more thorough account of Su’s experiences on Nov. 16-17 can be read below.)

Authorities also issued a Notice of Administratively Enforced Investigation from the Nanming District Branch of the Guiyang Municipal Government for Liang Xuewu, who helps at Huoshi Church, on Nov. 16, which can be read below Su’s written account.

On Nov. 18, Su received two documents, one stating that he must demolish the facility that was being used for unapproved activities and stop those activities by Nov. 21. The other document contained information about the rooms that authorities stated were used improperly, including information such as the rooms’ combined area, alleged crimes committed by Su, and dates of improper usage.

Su also updated China Aid on one of the church’s deacons, Zhang Xiuhong, who was detained in July for “illegal business operations.” Su said that authorities have not yet reached a final verdict for Zhang, whose arrest was officially approved on Sept. 1.

“They arrested Zhang Xiuhong because they [wanted] to investigate the church’s ‘money problem.’ They didn’t find a money problem, so now they are looking for a problem with the room,” another Christian said.

Additionally, Su said that shortly Zhang was detained, approximately 100,000 Yuan (U.S. $15,660) in the church’s two bank accounts was frozen by the authorities.

Su was also classified as a “criminal suspect” in early August for unknown reasons. He discovered this when he went to handle a problem with one of the church’s bank accounts.

“They act as if they want to close churches,” Su said. “First they mess with people, then they mess with money. I just went to the Nanming District [branch of the Guiyang Municipal] Government and said, ‘You ordered us to change, but you have not told me what is illegal and needs to change.’ Then they said they would talk with the leaders and, after meeting, inform us. I said I would wait for their notice.”

China Aid works to expose abuses of religious freedom and infringement of legal rights, such as those faced by Su and the Huoshi Church.

On Nov. 16, while going to the town of Qing to meet my mother, who was going to see the doctor, I received a phone call from Li, from the Nanming District branch of the Guiyang Municipal Government. [He said] that I must come to [the government] office at 2 p.m. and cooperate with an investigation that had something to do with me being under suspicion for changing the plan for how to use a house under my name in Hua Orchard, Nanming District (This house is where two colleagues, Liang Xuewu and Zhang Xiuhong, and I hold a house church. Among these, Zhang Xiuhong was detained by the public security bureau on July 28 for illegal business operations, and has not been released as of yet.). I replied, asking whether or not I could come tomorrow; the [official] told me to wait for their notice.

Around noon, I was told that my mother was about to be admitted to the hospital, and [the official] phoned again, saying that [meeting] tomorrow would not work and that I must come at once, otherwise, it could affect [any] advantages [I might have]. Without a better option, I left the situation with my mother and hurried the Nanming District government’s offices. The so-called investigation determined that we had changed our plan for [the house’s] use; naturally, I refused to accept this.

This morning, I received a phone call saying that my mother is not well, and that she would not wake up. I immediately drove over there in a hurry. On the way, I found that my phone had many missed calls, again from a member of the Nanming District government, who wanted me to wait for them in our church building. I said that I was unable to go because of my mother’s situation but could arrange for my colleagues to wait for them at the church. This person responded that I must personally be at the site. I could only remain silent.

At the hospital, they were conducting all kinds of tests [on my mother], and I unexpectedly received a call from my wife, saying that group of people claiming to be from the Nanming District government group came to her house and demanded that she provide her signature, identity card, marriage certificate, and other articles. Over the phone, I asked that these uninvited people leave and not disturb the people in my home. At that time, my wife was looking after my five-year-old daughter and five-month-old son at home. [We said that] if [the officials] did not leave, [we] would report it to the police.

Investigation details: You are suspected of changing the usage plans for the residence at Hua Orchard, Construction District C, Building 9, Entrance 2, House 24, Rooms 8, 9, 10, and 11. 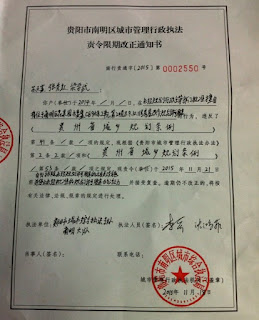 In order to investigate your (work unit) on suspicion of changing the usage plans for a residence, please bring your property rights documents and other related documents to the Nanming District branch of the Guiyang Municipal Government at 14:00 on Nov. 16, 2015.