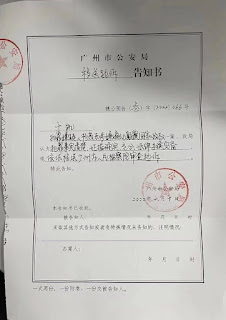 (Guangdong province—June 21, 2022) Chinese human rights activist Guo Feixiong  was detained and imprisoned for six months by authorities for asking to visit his critically–ill wife in the United States and for “inciting subversion of state power.” On June 10, his case was handed over by the Guangzhou Public Security Bureau to the Prosecutor’s Office for review and prosecution. On June 16, he met with his lawyer online for the first time to make three demands.

Human rights activist Guo Feixiong (given name: Yang Maodong) has been seeking to leave China to visit his cancer-stricken wife in the United States since last year. Guo wrote an open letter to Chinese Premier Li Keqiang when his wife became critically ill, requesting that the government allow him to travel to the United States. The authorities forbade Guo Feixiong from leaving the country for up to a year, refusing on the grounds that Guo did not admit his mistake according to the state-provided “confession”

In January 2021, Guo Feixiong tried to board a flight from Shanghai to the United States, but authorities immediately intercepted and detained him. Unable to be reunited, Guo’s wife, Zhang Qing, died of illness in the United States on January 10, 2022.

After Zhang Qing’s death, the authorities maintained their refusal of Guo’s request to leave the country to arrange his wife’s funeral.

During Guo Feixiong’s detention, the Guangzhou Public Security Bureau refused multiple letters and phone calls from his lawyer Ding Kai and his sister Dr. Yang Maoping for more than six months on the grounds that the case had not been transferred to the Prosecutor’s Office and that Guo “endangered state secrets”. The requests to speak to Guo were also not approved. Guo Feixiong went on a hunger strike for more than half a year to protest.

According to recent news, on June 10, the Guangzhou Public Security Bureau transferred the Guo case to the Guangzhou Prosecutor’s Office for review and prosecution. The move signals that the authorities may bring formal charges against Guo.

2. He demanded that China’s National People’s Congress rescind the rule that lawyers are not allowed to meet clients in cases suspected of endangering national security;

3. He urged the Chinese government to implement human rights reforms.

Guo’s sister Yang Maoping scoffed at the charge of “inciting subversion of the regime” against her brother. She commented that “the charge is absurd” and criticized the government for “having no sympathy.“ She noted that Guo applied to go abroad to take care of his wife, Zhang Qing, as she was dying—but the government did not allow him to visit. His wife was in despair at the last moments of her illness. “It’s inhumane,” Yang said.

According to his friend Xiao Shu, Guo Feixiong’s body was certainly damaged due to his long-term hunger strike, but his mental state remains intact. Despite enduring a hunger strike for half a year, he still walks steadily, his eyes are bright, and his speaking is sharp and decisive.

“No amount of injustice and suffering can destroy him. He is really a strong man. We have endless admiration for him. Please continue to keep watch on Guo Feixiong’s situation. Bless him. I believe that he can survive the tribulations.” Xiao Shu said.

Guo Feixiong is known for his participation in the New Citizens Movement and the Southern Street Movement. Guo Feixiong has been imprisoned twice, including for organizing street activities and calling for CCP officials to disclose their property. For the later “crime,” he was imprisoned for six years and was released in August 2019 after serving a full sentence.