Hammer and Sickle and Cross

Many Chinese Christians worship at unauthorized ‘house churches’ rather than at the state-controlled variety.

The Wall Street Journal SEPTEMBER 15, 2011
By ELLEN BORK
There is the authorized version of life in China propagated by the Communist Party, and then there is the unauthorized version. Liao Yiwu is one of the foremost authors of the latter, for which he has paid a steep price. His books, which include one about the deadly 2008 earthquake in Sichuan Province, are banned in China and circulate mainly as bootlegs. In the early 1990s, he spent four years in jail for writing and recording “Massacre,” a poem about the killing of democracy protesters in Tiananmen Square in June 1989. Recently he was warned that he faced going back to jail for the upcoming publication abroad of two books: a memoir of his imprisonment and “God Is Red.” In July, Mr. Liao slipped out of China and took refuge in Germany.
“God Is Red” consists of informal profiles of Christians in the cities of Beijing, Chengdu and Dali and in remote areas of the southwestern province of Yunnan. Beginning with a 100-year-old nun and ending with a recovering slacker in his 20s, his subjects describe the days of Western missionaries, the advent of communism—”like hearing the sinister caw of dark ravens,” the nun recalls—and the ambiguous tolerance of the post-Mao era. Most of the vignettes take the form of transcribed conversations, and the voices of individual believers are lively and immediate in Wenguang Huang’s translation.

Mr. Liao is an unlikely chronicler of China’s roughly 70 million Christians. Though skeptical about the vicious, anti-religious Communist propaganda he was raised on—he is 53—he is also skeptical of religion itself. Mr. Liao, who once worked as a street musician, gravitates to people from society’s “bottom rungs,” some of whose compelling stories he told in “The Corpse Walker” (2008). Yet it is precisely this interest in marginalized people and his staunch opposition to totalitarianism that led him to Chinese Christianity.
Mr. Liao became interested in the topic after encounters with two doctors who gave up successful careers to pursue missionary work, one in the mountains, the other in the underground “house churches” of Beijing (an alternative to the official churches controlled by the state). At the time, Mr. Liao himself was struggling, broke and on the run from security agents whom he had provoked by reporting on the outlawed Falun Gong spiritual movement. His research proved redemptive. “These trips have exhilarated me, lifting me out of my drunken depression,” he recalls. “In these remote corners, I have discovered a center point, where East met West, and although there has been a collision of cultures, there is now a new Christian identity that is distinctively Chinese.” 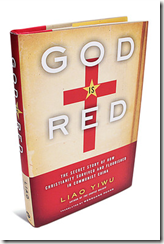 By Liao Yiwu
(HarperOne, 231 pages, $25.99)
Mr. Liao is a gumshoe oral historian, tracking down elusive subjects and making repeated trips to finish interrupted conversations. An outsider among the faithful, he is an unflinching observer of human suffering and shortcomings, including his own. In his hometown of Chengdu, he is reunited with an old friend. She is a poet who rejected her Communist cadre parents only to become disgusted with the avant-garde art circle she joined. Mr. Liao reminds her that he traveled in the same set. “How can I forget?” she says. “We tried writing stream-of-consciousness poems together. . . . Those artist friends of mine were supposed to be the cultural elite, but they were a bunch of soulless good-for-nothing animals.” Drawn by the beauty of hymns she overheard one Sunday morning, she became a Catholic and later spent seven months in jail for evangelizing.
Though many of Mr. Liao’s subjects claim to have no interest in politics, the question of political change in China is the subtext of “God Is Red.” They do not see themselves as anti-government, even if the authorities do. For some, persecution leads to even more stubborn pursuit of faith in the face of barbaric repression: The son of a minister named Wang Zhiming recounts how his father was unable to speak at his trial during the Cultural Revolution because a guard had cut out his tongue with a bayonet.
The situation for Christians eased somewhat after Mao’s death in 1976. It eventually became at least possible to strike a balance between observing one’s faith and conforming to the party’s rules. Still, it is not always clear where the red lines are. “We get harassed all the time,” the son of an underground minister tells Mr. Liao; things get especially tense during important political events or the visits of foreign leaders. Otherwise, the son says, “We are okay.”
Does this uneasy accommodation represent the future? “God Is Red” concludes with a conversation between Mr. Liao and the former slacker, Ho Lu. Christianity shapes the global orientation that Mr. Ho shares with his generation, and he rejects the anti-Western bent of China’s official “patriotic” church. “Christianity is predominantly a Western religion,” objects Mr. Ho. “How could you cut yourself off from the West?”
China’s post-Tiananmen generation is frequently written off as apolitical or co-opted by the party’s authoritarian capitalism. Mr. Ho seems at first to fit this pattern. “People in your age group are too interested in politics,” he tells Mr. Liao. Mr. Ho says he prefers the trendy blogger Han Han, who blends criticism of the party with an embrace of consumer culture, to Liu Xiaobo, the imprisoned Nobel Peace Prize laureate. But only up to a point. Mr. Ho has read Charter 08, the democracy manifesto that prompted the authorities to jail Liu Xiaobo, and his reaction offers hopeful hints for China’s future: “For the long term, I’m in favor of it, but I don’t support it in the short term. It won’t go very far because it doesn’t have grass-roots support. But I have to say that it was such damn hooligan behavior to arrest Liu Xiaobo before Christmas and then sentence him to 11 years in jail. Sorry, as a Christian, I shouldn’t swear, but I think God will forgive me this time.”
Ms. Bork is director of democracy and human rights at the Foreign Policy Initiative.
http://online.wsj.com/article/SB10001424053111904353504576566660315414844.html?mod=WSJ_article_comments#articleTabs%3Darticle