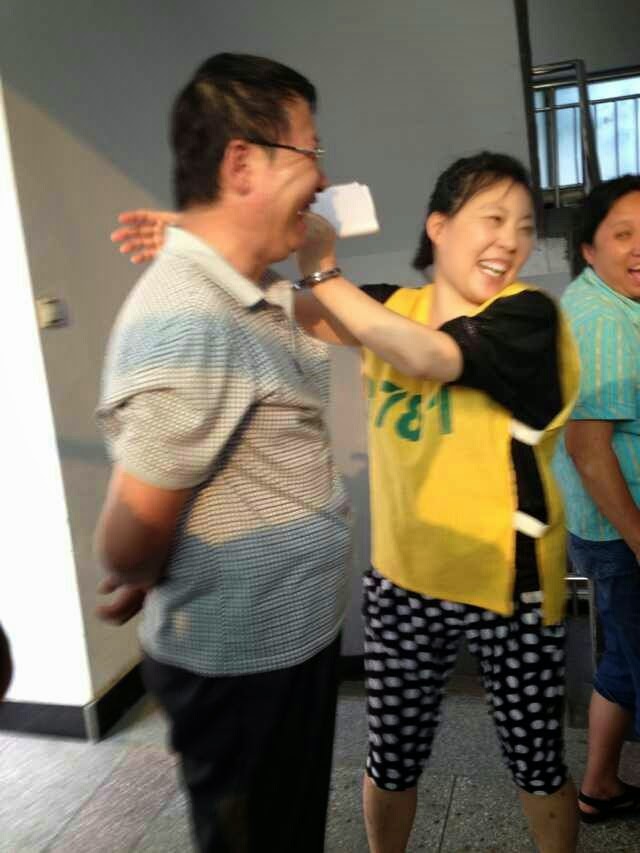 (Nanle County, Henan—Sept. 12, 2014) The Nanle County People’s Court released the verdicts and sentences for the case involving two members of the Nanle County Christian Church during a hearing that was held on Tuesday. Zhang Cuijuan and Zhao Junling were found guilty of “gathering a crowd to disrupt the public order” and sentenced to 1 1/2 years and one year in prison, respectively.

When Zhang and Zhao’s trial opened on Sept. 2, they were left waiting for the verdict, which the judge planned to announce in a Sept. 10 hearing. Instead, the court called the hearing into session a day earlier, leaving Zhang’s lawyers Li Baiguang and Liu Peifu unable to attend. Zhao also had no lawyers present as he was tricked into dismissing his lawyers in exchange for “leniency” prior to the initial hearing.

“The chief judge asked Zhang Cuijuan whether she would appeal. Zhang said she must appeal because the accusations against her are not based on facts. The chief judge then asked Zhao Junling the same questions. Zhao, probably out of the helplessness [of not having] a lawyer or from pressure from the government, paused for a while, and after a few seconds, he said he would not appeal. The whole [trial] then ended,” Fan said.

Zhang Cuijuan’s neice told China Aid that she would contact her aunt’s lawyers to inform them of her decision to appeal the verdict. “She is innocent. Even if it were one month, we would think she was wronged,” said Zhang “Shanshan” Lingxin, the daughter of Zhang’s brother and imprisoned Nanle County Christian Church Pastor Zhang Shaojie. Pastor Zhang was sentenced to 12 years in prison on a similar charge and a fraud charge back in July.

“It’s depressing, and I’m helpless,” Zhao said of his decision. “There’s nothing I can do about it because all [levels of] government are like this. They told me the role the court plays has ended. Since I was sentenced to one year in prison with a reprieve of two years, they want my local police station to put me under surveillance. I’m not allowed to go out, and I am supposed to write a report to them once a month. They asked me to spend 700-800 yuan (US $110-130) to buy a cell phone at the local police station. The cell phone has GPS function.”

Zhang and Zhao were detained in mid-November along with more than 20 other church members, including Pastor Zhang Shaojie. The persecution against the church resulted from a land dispute between the church and the local government.

Below is an opinion piece written by Zhang “Yunyun” Huixin, Zhang Cuijuan’s niece and the eldest daughter of Pastor Zhang Shaojie:

On Sept. 9, 2014, the last two detained “defendants,” Zhang Cuijuan and Zhao Junling, in Nanle Religious Case were respectively sentenced by Nanle County Court to 1 1/2 years in prison and one year in prison with a reprieve of two years on the charge of “gathering a crowd to disrupt public order.” Before this, the church’s pastor Zhang Shaojie was sentenced to 12 years in prison. As of now, except Li Cairen, [a church member] who has been kidnapped and placed under house arrest by Nanle County police and whose whereabouts are unknown, all the 20-some other brothers and sisters have been released on “bail pending trial.”

Though the judicial procedure for the Nanle Religious Case has come to a temporary conclusion, Nanle County government has not yet stopped its persecution of Nanle County Christian Church and Christians. Worshippers are still forbidden to enter the Central Hall, which the government lists as a “dangerous building.” Surveillance cameras have been installed at the doors of the homes of the church’s major co-workers. Every Sunday, the church’s Christians are obstructed and threatened by government officials of various places. Those brothers and sisters who were granted “bail pending trial” are all the more under the strict control and threats of the local police and government officials.

Since the Nanle Religious Case started in November 2013, under the united command of the Nanle County Party Committee, departments of all levels under the county government, including the public security bureau, the procuratorate, the court, the religious affairs bureau, the department for United Front Work, the ministry for propaganda, and other organizations have actively joined in and implemented the maddening persecution of Nanle County Christian Church.

They have illegally kidnapped and detained several dozen Christians, and they verbally abused and beat lawyers from outside the town who came to help the worshippers defend their rights. They also attacked reporters from international and domestic media who came to report the true story. With groundless charges, they have framed and imprisoned several innocent Christians. They wantonly abused their government power and deprived the citizens of their freedom to attend normal religious activities. The evil deeds committed by Nanle County Party Committee and the county government completely demonstrate that they are greatest violator of the law, and they are criminals who violate the freedom of religious belief of the citizens and their basic human rights.

My father, Pastor Zhang Shaojie, was sentenced by the court of the Chinese Communists to 12 years in prison, and my aunt was sentenced to 1 1/2 years because she wouldn’t plead guilty. The church’s missionary Zhao Junling was sentenced to a reprieve. All these happened because they tried to defend the rights of the church and of the worshippers in accordance with Chinese law. In doing so, they offended the local leaders in Nanle County, headed by the Party Secretary Huang Shouxi. Therefore, they began their maddening persecution of the church and its worshippers. Pastor Zhang Shaojie and Zhang Cuijuan wouldn’t yield or compromise with the evil forces. Deep in their hearts, they only obey God and the truth and wouldn’t yield to the so-called “sentencing in accordance with law,” which uses the name of the law but is actually religious persecution. All my family members support their decision.

Since the religious case started, we, the brothers and sisters of the church, have been united. We love and help each other even more, and we are all the more resolute in our religious belief. We will never stop gathering, and we will not stop promoting God’s justice and love. We have determined that we will certainly build a new church in Nanle County and will hoist the cross high.

In the past nine months or so, we have received support and sympathy from numerous brothers and sisters from both China and abroad and from many international Christian organizations. From the bottom of our hearts, we feel warmth, and we have become even more determined and strong. We thank all the people who have show concern, help, and support to Nanle County Christian Church. We will never forget those dozens of Christian rights defense lawyers who risked their lives to come to Nanle County to help us defend our rights. We also thank all the brothers and sisters who came to Nanle County to give us their support. We thank the United States government, the governments of other countries, and international human rights organizations for their precious voice on the Nanle County religious case. We also thank China Aid Association for its support and efforts for Nanle County Christian Church.

I’m the eldest daughter of Pastor Zhang Shaojie. Though my family has arrived in this land of freedom, almost all my brothers and sisters in the church are still living in the “land of Egypt” where they are enslaved daily by the evil government. I will never stop exposing the truth behind the Nanle County religious case to the international community. I will go to the U.S. Congress, the European Union, the United Nations, and other places to continue to tell them the facts—that Nanle County Christian Church is being persecuted—and I will expose the responsible people in the Nanle government who carry out the religious persecution. I hereby call on the Nanle County Government to immediately stop its persecution of our church, immediately release and acquit my father and my aunt, and investigate the legal liabilities of the people who perpetrated the persecution. I call on them to abide by the Chinese Constitution and other laws and guarantee, in the true sense of the word, all the basic human rights, including the right to religious freedom.

Blessed are those who are persecuted because of righteousness, for theirs is the kingdom of heaven. (Matthew 5:10). I believe that my father, Zhang Shaojie, my aunt Zhang Cuijuan and all other people who have been wronged and persecuted in the Nanle County religious case will receive God’s blessing. Amen!