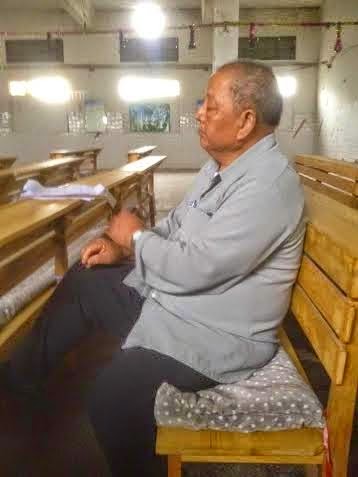 “Who will be the presidents [of the CCC and the TSPM] has already been decided internally by the government,” Zhang Cuixia, one of Pastor Zhang Shaojie’s sisters, said. “The government just wanted to make a show of asking the legal representative of every church to be there.” Zhang Cuixia said that when some of the churches’ representatives refused to attend, officials simply found non-believers to stand in their place.

“They didn’t cast votes. From the very beginning, there were no rules—no rules at all,” Zhang Cuixia said of the meeting, which took place on Sept. 24.

“For anyone who didn’t attend the meeting, his or her certificate to gather together will be suspended, and they won’t be allowed to attend gatherings,” Fan Ruizhen, a Nanle County Christian Church member, said. “When [some legal representatives and church deacons] came for the meeting, the government didn’t let them elect their candidates. When the meeting started, all the people were required to stand and sing the national anthem. Then, they directly said that Ren Yufa is now the president and Dai Zhanmin is now the vice president. There were other appointments as well.”

“Ren Yufa is an elderly man in his 80s. He doesn’t have a church [home]. As for the vice president Dai Zhanmin, he was branded by the authorities as a heretic in 1999,” Fan said.

Zhang Cuixia told China Aid that Dai Zhanmin, who was chosen to be the vice president of the Nanle County CCC and TSPM, was asked by officials to lead the meeting.

Adding to the problems with the meeting, local Christians didn’t learn of the meeting until that morning, according to Zhang Lingxin, the youngest daughter of Pastor Zhang.

Zhang Cuixia also said that the reason the government persecuted the church and her brother, Pastor Zhang, who was sentenced to 12 years in prison for fraud and “gathering a crowd to disrupt public order” on July 4, was because he didn’t obey the government. “The reason they sentenced Zhang Shaojie to prison is because they want to choose people who obey and work in tandem with the government. This is their way of tackling the churches.”

Pastor Zhang’s second and final appeal of his sentence was rejected on Aug. 21. Pastor Zhang’s attorneys were not notified of the hearing until it was over and they had already made a decision. The court told Pastor Zhang’s lawyers that they had delivered the verdict directly to him, but this hasn’t been confirmed as prison officials have refused to allow the lawyers to meet with Pastor Zhang, saying that they have no more business with him as the trial is over. Pastor Zhang is currently serving his sentence at Baitiaohe Prison in Neihuang County, Anyang, Henan.

Two other Nanle County Christian Church members were also sentenced recently. On Sept. 9, the Nanle County People’s Court found Zhao Junling and Zhang Cuijuan, another of Pastor Zhang’s sisters, guilty of “gathering a crowd to disrupt public order.” Zhao was sentenced to one year in prison with a two-year reprieve, and Zhang Cuijuan was sentenced to 1 1/2 years. While Zhang Cuijuan said she intends to appeal the sentence, Zhao told the court that he wouldn’t appeal. Zhao later told China Aid he felt he couldn’t appeal because he had been tricked into dismissing his lawyers.