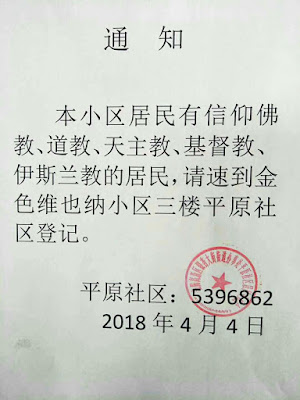 (Anyang, Henan—April 11, 2018) A government order is demanding that Christians, Buddhists, Taoists, and Muslims register with the government in Anyang, a city in China’s central Henan province, ChinaAid learned recently.

However, an anonymous Christian who spoke with ChinaAid on Thursday, said that the government is only persecuting Christians. “In the past two months, the government banned all Catholic churches and (Protestant) house churches, and that didn’t happen to any other religions.”

The officer answering the phone at the Pingyuan Neighborhood Committee reiterated that all residents who have religious beliefs were required to register. However, she did not think it was a serious situation. “Bring your household registration and ID card to register,” she said. “Fill out a form, fill in your name, birth date, address, religious background, when you converted, the religious background of your family members, etc.”

The notice has been translated in full below.

In the meantime, the government in Lushan County, which is located in Pingdingshan, Henan, summoned Christians from the state-run Three-Self Churches for ideological reorientation. At the conference, the Lushan County Religious Affairs Bureau met with the preachers and asked them to study the State Council’s revised Religious Affairs Regulations.

“Everyone received a copy,” a Christian said. “About 700 people attended the meeting.”

During the conference, the bureau’s officials announced that 95 percent of the local churches had hung the Chinese flag but emphasized that the statistics should reach 100 percent. They also said that children under the age of 18 should not be allowed in churches and religious posters and “propaganda” should not appear on local buildings.

ChinaAid exposes abuses, such as those suffered by church members in Henan, in order to stand in solidarity with persecuted Christians and promote religious freedom, human rights, and rule of law.