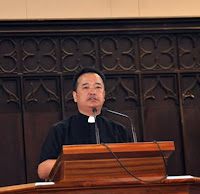 (Wenzhou, Zhejiang—Feb. 4, 2016) Government personnel in China’s coastal Zhejiang criminally detained a high-ranking official of a state-run Christian organization and his wife on Jan. 29 after he publicly opposed the cross removal campaign sweeping through the province.

Li Guanzhong, who serves as the chairman of the China Christian Council (CCC) in Pujiang County and the senior pastor of Puyang Christian Church, and his wife, Zhang Shuzhen, received criminal detention sentences on charges of accepting bribes and embezzlement.

In July 2014, Li resisted the government’s attempt to pressure him into destroying his own church’s cross and publicly condemned the cross demolitions.

After taking the same stance, Pastor Gu Yuese, the chairman of the provincial CCC, received a notice on Jan. 18 stating that the Secretary-General of the Three-Self Patriotic Movement would replace him as senior pastor of China’s largest official church.

On Jan. 27, authorities incarcerated Gu and his wife, Zhou Lianmei, who was later released. China Aid learned that Gu had been charged with “embezzlement of funds” and sentenced to “residential surveillance in an undisclosed location,” also known as a “black jail.”

Zhejiang’s provincial government began demolishing church buildings and crosses in 2014 in a campaign titled “Three Rectifications and One Demolition.” Since then, authorities have destroyed an estimated 1,800 crosses and detained hundreds of Christian protesters and their lawyers.

“The persecution of government-approved church leaders is alarming,” said Bob Fu, president of China Aid. “It marks an escalation in the persecution of those opposing the cross demolition campaign. The harassment and detention of Christians and human rights defenders who have bravely spoken out against injustice must stop immediately.”