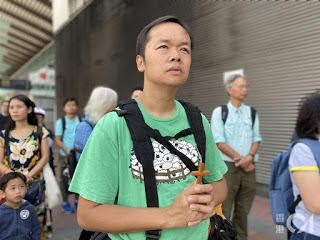 In 2019 during the anti-extradition bill protests, the Good Neighbor North District Church initiated its “Protect Our Children Campaign,” as it attempted to alleviate the violent confrontations between the protesters and police forces. Authorities arrested Chan Hoi-hing, and amid the passage of the New Security Law, his family immigrated to England.

Pastor Chan reported to Agence France-Presse (AFP) that not only had HSBC frozen the church’s and his bank accounts without notice, they had frozen his wife’s as well. On Tuesday, Pastor Chan also posted a video on Facebook in which he disclosed that due to the bank’s actions, he, his wife, and their four children, currently in England, do not have any money for living expenses. He believes that the “Protect Children” voluntary campaign with the ensuing freezing of funds depict a form of suppression to community service and religion.

On December 8, when authorities conducted a search on the Hong Kong church, police also sieged several social workers, including Lau Ka-tung, a registered social worker the church employs. Chinese Communist Party (CCP) authorities initially dispatched officers to search the church gathering location in Kwun Tong and then sent them to the Fanling Church.

During July of 2019, after Mr. Lau participated in the Hong Kong anti-extradition bill protest parade, authorities accused him of obstructing the police dispersion operation. The court convicted and sentenced Mr. Lau to serve one year in prison. After being released on bail for 100,000 Hong Kong dollars (12,900.80 USD), he appealed his sentence in September and began to work Good Neighbor North District Church. On December 8, he posted on Facebook that HSBC had also frozen his account.

In 2016, the Hong Kong government had recognized and registered Good Neighbor North District Church as a tax-exempt charity group. This week, HBSC reportedly received an executable document from police requesting that the bank seal all funds of the church, as well as those of Lau Ka-tung. HSBC refused to comment on this case.

Good Neighbor North District Church sent a letter to Wong Tung-shun (Peter Wong), CEO of Hong Kong and Shanghai Bank Corporation, filed a complaint, and appealed the action freezing its accounts. “This is undoubtedly an act of political revenge…” the letter states.

Taiwan’s Liberty Times quotes Hong Kong’s prominent lawyer Luk Wai-hung stating that in the past, the freezing of assets required attaining sufficient evidence and obtaining authorization from the Judge of Hong Kong’s High Court. In this incidence, however, the Hong Kong Security Law lowered that threshold. Now, it only needs the approval of the public security bureau’s director-general and authorities may freeze assets on the grounds of reasonable doubt. Some Hong Kong netizens expressed their loss of faith in Hong Kong’s finances and plan to cancel their HSBC accounts.

China views civil society organizations such as charity groups as accomplices of the “Color Revolution.” The CCP has now launched freezing bank accounts and other financial types of suppression outside mainland China and into Hong Kong, targeting the church for the regime’s latest rounds of strikes.

England recently returned Hong Kong, a former British colony since July 1, 1997, to the People’s Republic of China, establishing Hong Kong as a special administrative region. The Chinese government has determined that Hong Kong only has power over national defense. The Chinese Central government will directly maintain jurisdiction over Hong Kong’s foreign affairs.

In recent years, the CCP has shaken the autonomous status of Hong Kong. In May of 2019, Hong Kong lawmakers scuffled over a bill that would allow extraditions to China and accept trial from the Chinese courts controlled by the CCP. Large scale street protests ensued from this bill. Under Beijing’s support, Hong Kong authorities began to curb protesters, arresting them, as well as pro-democracy activists.

Under this new law which many consider Hong Kong’s “death knell officials have arrested more than 20 people. These include:

As Hong Kong’s issues have become international, the US has revoked Hong Kong’s preferential status and imposed sanctions on Hong Kong’s chief executive Carrie Lam Cheng Yuet-ngor, and other senior city officials. The U.S. Department of State and United States’ treasury have imposed additional sanctions targeting 14 “subnational level” lawmakers, and vice Chairman of the Standing Committee of the National People’s Congress. These individuals passed the Hong Kong national security law. The assets of these individuals have been frozen in the US. The US has also forbidden them to enter into America. All of their financial transactions with American banks will be cut off.

On December 7, the US House of Representatives voted to pass the “Hong Kong People’s Freedom and Choice Act.” Once in effect, Hong Kongers in the US may apply for temporary protected status, and those who experience political repression may apply for US refugee status.