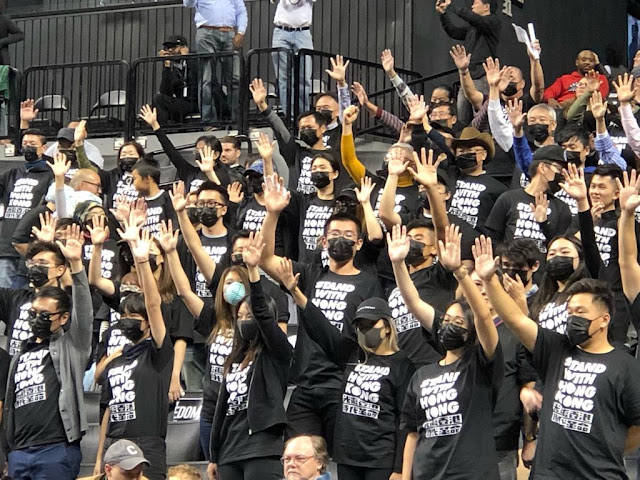 (New York—Oct. 18, 2019) Hundreds of people have gathered at the Brooklyn Nets game tonight to call for freedom in Hong Kong. Their actions come amid ongoing clashes between the NBA and China over a tweet from one of the league’s general managers.

The group has gathered to raise the ongoing struggle Hong Kong residents face in protecting their rights. For months now, millions have taken to the streets in freedom protests. Clashes with the police have been constant and violent, with some even losing their eyes to rubber bullets and an 18-year-old being shot in the chest.

The protests were sparked by the introduction of a bill, which would have allowed criminally charged Hong Kong residents to be tried in China. The legislation has since been dropped, but locals continue to protest for the removal of those who attempted to make it law.

This surge of tension has captured the international media, and people from all over the world began to take sides. Daryl Morey, General Manager of the Houston Rockets, featured a pro-Hong Kong post on his Twitter account a few weeks ago.

Since then, the NBA has been locked in a heated conflict with China, which subsequently canceled all broadcasts of the league. Expansion into China has been a multi-billion-dollar move for the NBA, with Forbes estimating 640 million Chinese citizens tuning into its games.

The NBA has waffled in between supporting Morey’s right to free speech and trying to appease China.

As such, Hong Kong supporters have decided to bring the issue of freedom to an NBA court. Wearing black “Stand with Hong Kong” shirts, they have assembled at the Barclays Center tonight to further draw the attention of the American people.

They have been singing and chanting. At one point, they have risen and raised five fingers, each representing a demand Hong Kong people are making of their government. These requests include the resignation of key officials and the release of arrested protesters.

Video of protesters raising their hands in support of Hong Kong at the game.
(Video: ChinaAid)

Film producer Andrew Duncan is also present and purchased more than 300 tickets for Hong Kong supporters to attend the game.

One of the attendees, author and commentator Chen Pokong, said, “We have come here today to support the freedom of expression, freedom of speech, because these basic human rights are prohibited in China. China tries to deprive freedom from the Hong Kong people. The CCP [Chinese Communist Party] are trying to censor the American people’s speech, like with the NBA, like with the silencing of the Rockets GM. The CCP has chosen the NBA as a target – which means the spread of their dictatorship and censors has made it to America. So the threat of the CCP is not just a threat to Hong Kong, but to the American people and to ones across the world. Today we stand with the Hong Kong people and stand with the NBA for freedom of speech and expression. The danger of the CCP is not just in Hong Kong but in America – so Americans should stand up against the CCP and for free speech. American should support HK because they are fighting at the frontier against the CCP dictatorship.”

Another person in attendance is Tiananmen Square student leader Xuguang Zheng, who said, “I am here on behalf of the organization called Global Supporting Hong Kong New York branch. I am not an NBA fan, but I am here to support the freedom of speech for the NBA and the Hong Kong people. I feel like I should support by being here.

To watch a video of the protests, please click here.