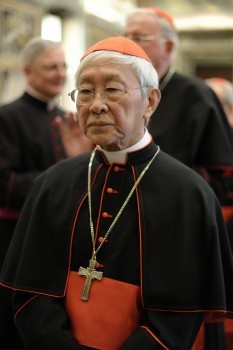 (Hong Kong—February 25, 2022) Ta Kung Pao, a Hong Kong newspaper sponsored by the Chinese Communist Party (CCP), published an article condemning 90-year-old Cardinal Joseph Zen Ze-kiun, Bishop emeritus of Hong Kong. This is a signal that religious freedom in Hong Kong is continuously gaining attention from Beijing, and it shows Beijing’s desire to have more control over religion in Hong Kong. It is a sharp change from its previous commitment to safeguarding fundamental civil rights.

At the end of January, Hong Kong’s Ta Kung Pao, which is controlled by the CCP, published several articles sternly condemning Cardinal Zen for a “long history of abusing his clergy status to engage in anti-China activities and stirring up chaos in Hong Kong” and for allegedly inciting students to violate a series of government measures in 2019.

Both Catholics, Jimmy Lai, and Martin Lee Chu-ming were charged with participating in pro-democracy rallies banned by the authorities.

The article targeting Cardinal Zen also pointed out that many pro-democracy activists arrested in the pro-democracy movement received education from church-affiliated schools. In addition, three sections of the article reiterated that the church “incited riots” among Hong Kong students and provided shelter for pro-democracy protesters, and suggested that Hong Kong’s religious institutions should be placed under the government’s management.

Joseph Zen Ze-kiun served as the Bishop of Hong Kong from 2002 to 2009. In 2006, Pope Benedict XVI elevated him to College of Cardinals despite Zen being an outspoken critic of the Chinese government and its religious policies. He is also a participant and advocate of social movements.

When Cardinal Zen was a coadjutor bishop, he publicly supported the Holy See’s canonization of the priest killed in the Boxer Rebellion and was banned by the Chinese government from visiting Mainland China for six years. At that time, the Chinese state media repeatedly published criticism of Joseph Zen. The six-year ban ended in 2004.

Cardinal Zen has been an outspoken defender of civil rights in China and Hong Kong. From 2014 to 2016, he denounced China’s forcible demolition of churches and the crosses on churches and held a mass for the victims of the June 4, 1989, Tiananmen Square massacre.

Cardinal Zen also opposed the Vatican’s agreement with Beijing on the appointment of bishops in China.

He publicly defended civil rights in Hong Kong and mainland China and was present at the court that heard the alleged violations of the national security law Beijing imposed on Hong Kong in 2020.

The public opinion of Ta Kung Pao cannot be ignored; it is often the prelude to the CCP’s propaganda and offensive stands and should attract international attention. After all, freedom in Hong Kong has seriously eroded in recent years. If places of worship are controlled, freedom of thought, conscience, and religion is restricted, sermons are censored, and clergy are imprisoned or disappear or forced to remain silent, Hong Kong will become a de facto mainland Chinese city.

Cardinal Zen has become the target of a new round of public opinion attacks, which may signify that the Hong Kong church will be taken over. The Catholic Church has a certain degree of autonomy in Hong Kong, and it has not fully replicated the CCP’s radical control over religious groups in mainland China. Still, it is unknown when its autonomy will end since there are some indications of the CCP’s gradual takeover of religion.

The Most Reverend Stephen Chow Sau-Yan, S.J., the new bishop of Hong Kong, does not identify with the pro-democracy movement like Cardinal Joseph Zen Ze-kiun. But his public statement after his confirmed appointment showed that even if he had to exercise caution, he would still uphold the principles of human dignity and freedom of conscience.